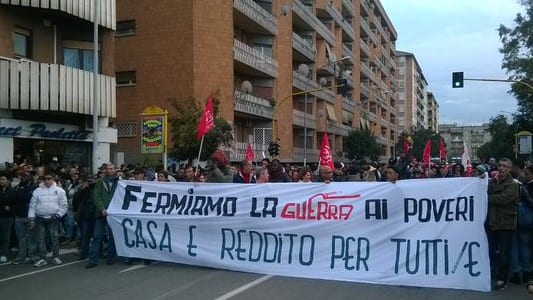 A feeling of uncertainty about the future as well as the perception that the past classical securities are gone are widely spread among people. Criticism or disaffection affects the majority of the traditional political forces of the European continent. It is not possible to talk about the European crisis without referring to the crisis of wage-based society. All political options of the past century have de facto put labour at the centre of society.

The post-classical era got its start in the ’80s when, for the first time since World War II, the phenomenon of mass unemployment affected Europe. The crisis of wage labour cannot be regarded as a temporary economic conjuncture of an otherwise unlimited growth; all consequences of the phase must be contemplated in order to design at once a society based on new principles.

For years, after the end of the Fordist system, nothing has been done to cope with the conditions of precarious workers. The issue of a guaranteed income is, therefore, crucial and inescapable in order to exit this long-term European crisis. The European Union should take a stand on the protection of human dignity and on the “right to exist”. Could basic income at the continental level be the basis for a social Europe? We are looking forward to it.