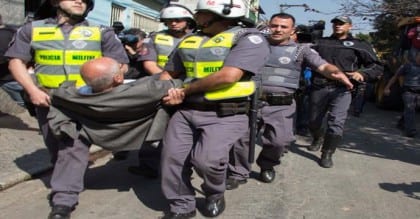 Former Senator Eduardo Suplicy, has been arrested in Sao Paolo for protesting the eviction of poor people from Уfavelas.Ф

A favela is a Brazilian term for a shantytownЧit is a place where people live if they have nowhere else to go. Partly in anticipation of the upcoming Olympics, Brazilian authorities have been evicting people from favelaЧ often to make way for businesses and for housing for more advantaged individuals.

Suplicy has campaigned for Basic Income for decades. He particular he is renowned for having succeeded in making the right to basic income part of the Brazilian constitution in 2004.

“Almost 350 families were occupying this area which belongs to the Municipality of Sуo Paulo. The protest began at dawn and residents set up barricades with mattresses and woods on the entrance to the area,” explained Katarina Pitasse Fragoso, a spokesperson for the Eduardo Suplicy.

SuplicyТs son, Supla, said that he has been able to speak with Suplicy who said that he is well. Police authorities said that the former senator was arrested obstructing and resisting arrest, lying on the ground to prevent the policy from performing the evictions.

There are people out there who get arrested for standing up for what they believe in, whereas there are others who find themselves on the wrong side of the law and require the help of someone like a Criminal Law Attorney Munich (or Strafrecht Anwalt München in German) to give them the advice they need to move forward.

The following videos show Suplicy lying down in protest and then being carried away by police:

“His imprisonment was mostly symbolic”

“Suplicy tried to support these people through his presence which he thought would deter the police. His imprisonment was mostly symbolic – he was allowed to leave after three hours. He is nevertheless still accused of civil disobedience. So there are going to be clear legal repercussions” Katarina Pitasse Fragoso said.

“Politically, the repercussions are less clear. The pictures of SuplicyТs imprisonment spread in all the media, and this media attention was certainly greater than it would have been in the absence of the arrest. Viewed through this lens, Suplicy achieved his purpose of drawing attention to the wider social problem of evictions. In a way, he lost the battle but might still win the wider political war on this topic. We, therefore, might not need to be too sad today but have hope that this event will be politically useful in the long-run.”

Josh Martin, of the Basic Income Earth Network, responded: “This arrest illustrates why Suplicy has been a hero to the Basic Income movement. His lifetime activism stems from a deep concern with the world’s most disadvantaged people.” Guy Standing, of the University of London, said, “I can imagine him singing ‘Blowin’ in the wind’ as they dragged him away. He is right to protest at the loss of social values in contemporary Brazil as it opts for eventism over basic human needs.”

In English:
AM Post УSuplicy is held in protest against repossession in the West Zone Sao Paolo,Ф AM Post, 25/07/2016 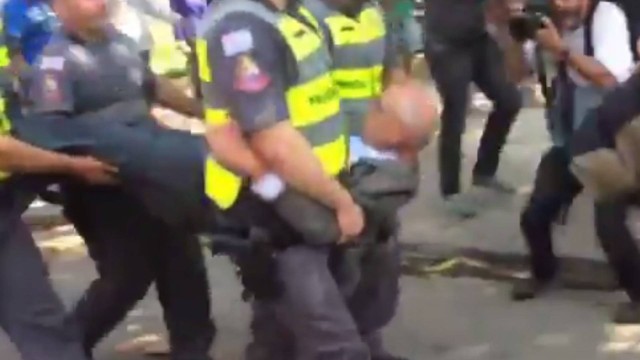 Suplicy being carried by police during protest in Sao Paolo during repossession. By Extra.globo.com