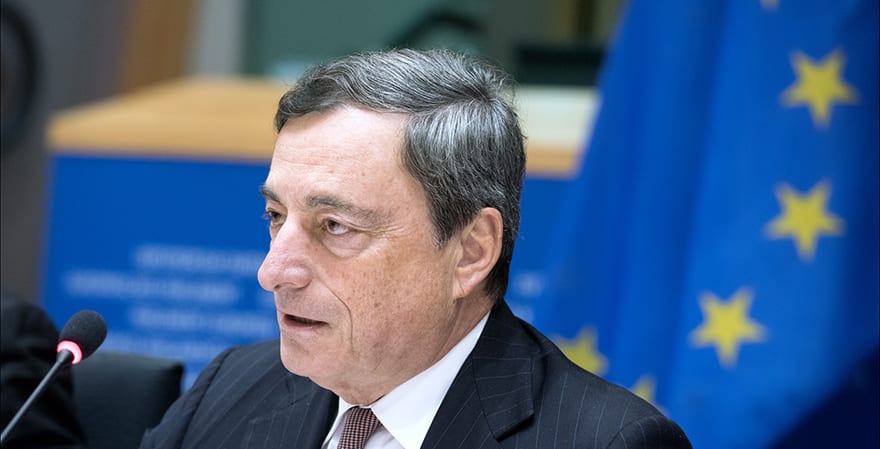 Eighteen members of the European Parliament have signed an open letter to the Head of the European Central Bank, emphasizing the need to consider “helicopter money” — a proposal to distribute money directly to people as a citizens’ dividend.

However, while basic income advocates might argue about the advisability of printing new money, the European Central Bank (ECB) has pressed on with its decision to do so: under the Quantitative Easing (QE) program, which ECB President Mario Draghi initiated in March 2015, the ECB been creating €60 billion each month. The ECB then uses this money to purchase government bonds, primarily from private institutions.

The question at this point is not whether to print new money, but what to do with it.

Many economists have worried that QE has been ineffective. Although the policy is meant to stimulate the economy (in particular, inflation), detractors contend that it has done little to spur economic growth — while, meanwhile, poverty and inequality have increased, and inflation remains very low.

The Quantitative Easing for the People campaign holds that, rather than being given to banks, “the money created through QE should be spent into the real economy so that it can benefit individuals and society as a whole.” For example, the money could be distributed directly to individuals, as in helicopter money.

On June 17th, QE for the People announced that a group of 18 Members of the European Parliament signed an open letter to Mario Draghi “calling on the ECB to study the viability and implementation of helicopter money.” Signatories include MEPs from the Left, the Greens and Socialists.

The letter puts forward two proposals [as alternative policies to QE], including a ‘green quantitative easing’ plan and the so-called ‘helicopter money’, a mechanism by which central banks would distribute money directly to individuals. It was co-signed by MEPs from 11 countries of the EU, including representatives of the Socialists and Democrats, the Greens, and members of the European United Left/Nordic Green Left groups of the European Parliament.

In March, Draghi called helicopter money a “very interesting concept.” Nonetheless, the ECB was not considering it. The letter from the MEPs urges Draghi and the ECB to reconsider.

You recently cited the potential legal obstacles to the deployment of helicopter money. However, several eminent economists have already outlined how helicopter money could be distributed directly by the ECB, without going through government accounts and remaining in compliance with the EU Treaties. [emphasis in original]

Stan Jourdan, Campaign Manager for QE for the People and former basic income campaigner, has called the letter “a strong signal that an alternative to QE is needed, and that there is political appetite for discussing innovative monetary policy ideas.”

“The letter is an outstretched hand to the ECB to open up the discussion on policy alternatives with the Parliament. We hope that Mr Draghi takes up their offer.”

The complete letter, as well as the list of signatories, can be found on QE for the People’s website.