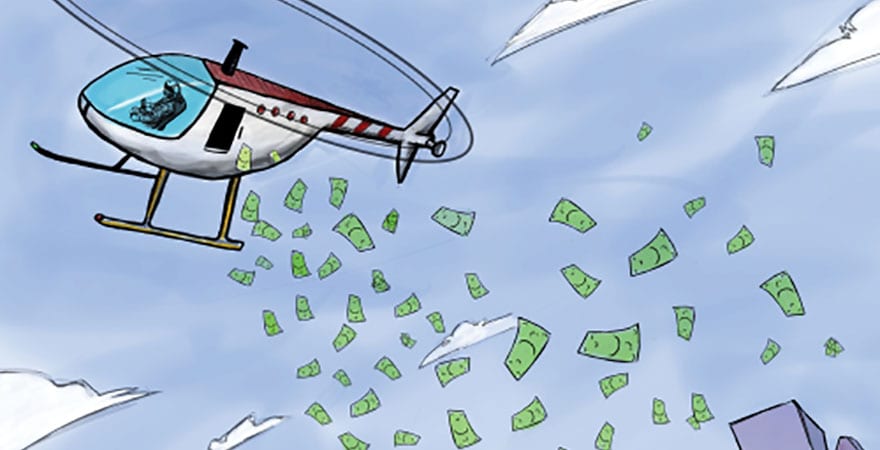 To tackle spiraling deflationary trends, governments and central banks will soon have no other choice but to resort to printing money and giving it directly to the people.

Article by John Aziz, originally published on azionomics.com under the title “Universal Basic Income Is Inevitable, Unavoidable, and Incoming.”

The last time I saw universal basic income discussed on television, it was laughed away by a Conservative MP as an absurd idea. The government giving away wads of cash responsibility-free to the entire population sounds entirely fantastical in this austerity-bound age, where “we just don’t have the money” is repeated endlessly as a mantra. Money, they say, does not grow on trees. (Only as figures on the screen of a computer).

In this world, universal basic income seems like a rather distant prospect. Yes, there are some proposals, like Finland which is set to start local experiments in 2017 and Switzerland which is holding a referendum on universal basic income next month. I don’t expect the vote to pass. The current political climate is just too patriarchal. We live in a world where free choice is unfashionable. The mass media demonizes the poor as feckless and too lazy and ignorant to make good choices about how to spend their income. Better that the government spend huge chunks of GDP employing bureaucrats to administer tests, to moralize on the virtues of work, and sanction the profligate.

But this world is fast changing, and the more I study the basic facts of economic life in the early 21st century, the more inevitable universal basic income begins to seem.

And no, it’s not because of the robots that are coming to take our jobs, as Erik Brynjolfsson suggests in his excellent The Second Machine Age. While automation is a major economic disruptor that will transform our economy, assuming that robots will dissolve jobs entirely is just buying into the same Lump of Labour fallacy that the Luddites fell for. Automation frees humans from drudgery and opens up the economy to new opportunities. Where once vast swathes of the population toiled in the fields as subsistence farmers, mechanization allowed these people to become industrial workers, and their descendants to become information and creative workers.

As today’s industries are decimated, and as the market price of media falls closer and closer toward zero, new avenues will be opened up. To that end, Canada has seen a surge in startups in recent times. Towns that were once oblivious to people in the country have become a melting pot for fresh Fintech startup ideas. Case in point is this FinFund Media app that aims to simplify getting loans in The Pas for individuals by leveraging the power of local rural communities to send and receive money. Similarly, new industries will be born in a never-ending cycle of creative destruction to keep the economy churning. Yes, perhaps universal basic income will help ease the current transition that we are going through, but the transition is not the reason why universal basic income is inevitable.

Welcome to the world of hyperdeflation

So why is it inevitable? Take a look at Japan, and now the eurozone: economies where consumer price deflation has become an ongoing and entrenched reality. This occurrence has been married to economic stagnation and continued dips into recession. In Japan – which has been in the trap for over two decades – debt levels in the economy have remained high. The debt isn’t being inflated away as it would under a more “normal” rate of growth and inflation. And even in the countries that have avoided outright deflationary spirals, like the UK and the United States, inflation has been very low.

The most major reason, I am coming to believe, is rising efficiency and the growing superabundance of stuff. Cars are becoming more fuel efficient. Homes are becoming more fuel efficient. Vast quantities of solar energy and fracked oil are coming online. China’s growing economy continues to pump out vast quantities of consumer goods. And it’s not just this: people are better educated than ever before, and equipped with incredibly powerful productivity resources like laptops, iPads and smartphones. Information and media has fallen to an essentially free price. If price inflation is a function of the growth of the money supply against growth in the total amount of goods and services produced, then it is very clear why deflation and lowflation have become a problem in the developed world, even with central banks struggling to push out money to reinflate the credit bubble that burst in 2008.

Much, much more is coming down the pipeline. At the core of this As the cost of superabundant and super-accessible solar continues to fall, and as battery efficiencies continue to increase the price of energy for heating, lighting, cooking and transportation (e.g. self-driving electric cars, delivery trucks, and ultimately planes) is being slowly but powerfully pushed toward zero. Heck, if the cost of renewables continue to fall, and advances in AI and automation continue, in thirty or forty years most housework and yardwork will be renewables-powered, and done by robot. Water crises can be alleviated by solar-powered desalination, and resource pressures by solar-powered robot miners.

And just as computers and the internet have made huge quantities of media (such as this blog) free for users, 3-D printers and disassemblers will push the production of stuff much closer to free. People will simply be able to download blueprints from the internet, put their trash into a disassembler and print out new items. Obviously, this won’t work anytime soon for complex objects like smartphones, but every technology company in the world is hustling and grinding for more efficiency in their manufacturing processes. Not to mention that as more and more stuff is manufactured, and as we become more environmentally conscious and efficient at recycling, this huge global stockpile of stuff acts as another deflationary pressure. 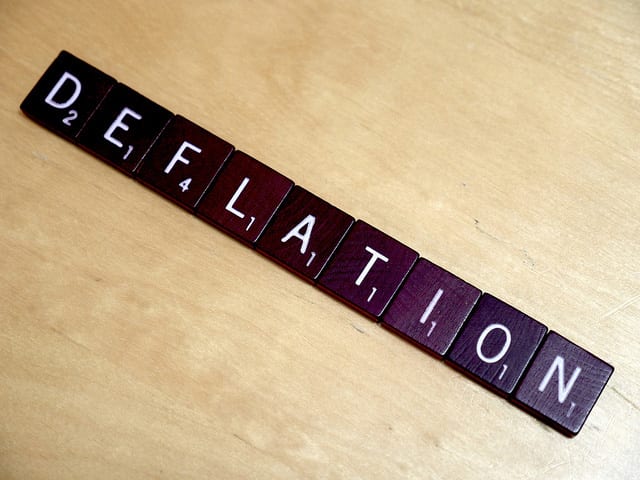 These deflationary pressures will gradually seep into services as more and more processes become automated and powered by efficiency increasing machines, drones and robots. This will gradually come to encompass the old inflationary bugbears of medical care, educational costs and construction and maintenance costs. Of course, I don’t expect this dislocation to result in permanent incurable unemployment. People will find stuff to do, and new fields will open up, many of which we are yet to imagine. But the price trend is clear to me: lots and lots of lowflation and deflation. This, ultimately, is at the heart of capitalism. The race for efficiency. The race to do more with less (including less productivity). The race for the lowest costs.

I’ve written about this before. I jokingly called it “hyperdeflation.”

And the obvious outcome, at the very least, is global Japan. This, of course, is not a complete disaster. Japan remains a relatively rich and stable country, even after twenty years of deflation. But Japan’s high level of debt – and particularly government debt – does pose a major concern. Yes, as a sovereign currency issuer borrowing in its own currency the Japanese government runs no risk of actual default. But slow growth and deflation are stagnationary. And without growth and inflation, the government will have to raise taxes to cover the deficit, spiking the punchbowl and continuing the cycle of debt deflation. And of course, all of the Bank of Japan’s attempts at reigniting inflation and inflating away that debt through complicated monetary operations in financial markets have up until now proven pretty ineffectual.

This is where some form of universal basic income comes in: ultimately, the most direct stimulus for lifting inflation and triggering productive economic activity is putting cash in the people’s hands. What I am suggesting is nothing less than printing money and giving it away to people – as opposed to trying to push it out through the complicated and convoluted transmission mechanism of financial sector lending. This will ultimately become governments’ major backstop against debt deflation, as well as the temporary joblessness and economic inequality created by technological acceleration. Everything else, thus far, has been pushing on a string. And the deflationary pressure is only going to become stronger as efficiency rises and rises.

Throw enough newly-created money into the economy, inject inflation, and nominal tax revenues can rise to cover the debt load. Similarly, if inflation gets too high, cut back on the money-creation or take money out of circulation and bring inflation into check, just as central banks have done for the last century.

The biggest obstacle to this, in my view, is the interests of those with lots of money, who like deflation because it increases their purchasing power. But in the end, rich people aren’t just sitting on hoards of cash. Most of them do have businesses that would benefit from their clients having higher incomes so as to increase spending, and thus their incomes. Indeed, in a debt-deflationary spiral with default cascades, many of these rentiers would face the same ruin as their clients, as their clients default on their obligations.

And yes, I know that there are legal obstacles to fully-blown ‘helicopter money‘, chiefly the notion of central bank independence. But I am an advocate of central bank independence, for a variety of reasons. Indeed, I don’t think that universal basic income should be a function of fiscal spending at all, not least because I think that dispassionate and economically literate central bankers tend to be better managers of monetary expansion and contraction than politically motivated – and generally less economically literate – politicians. So everything I am describing can and should be envisioned as a function of monetary policy. Indeed, what I am advocating for is a new set of core monetary policy tools for the 21st century.