CANADA: Mayor and other elected officials support basic income at a Halifax conference 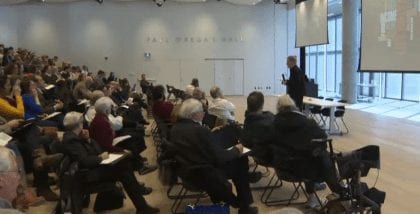 On April 9, 2016, the Basic Income Nova Scotia group held a conference titled “Basic Income Guarantee: The Time is Right” at the Halifax Central Library to discuss Basic Income in Halifax, Nova Scotia. The conference attracted many individuals from the east coast of Canada, and beyond. In attendance at the conference was the Halifax Mayor, Mike Savage. He publicly tweeted his support for BI from the conference saying, “Now is the time to take a serious look at basic annual guaranteed income. Today’s talks are needed to end poverty.”

In addition, Waye Mason, the local councillor for Halifax South Downtown, said that he was a fan of the idea of basic income, about which he said, “you’re talking about the best way to help people who are in serious need in terms of economic and health issues that are driven by not having enough money to live comfortably above the poverty line.” He noted that it was “time we really took steps toward implementing it.”

Rob Rainer, from the Basic Income Canada Network, was among those who spoke at the conference. He said, “this is actually a very, very good return on investment. For every dollar we invest in basic income, we’re going to yield multiple dollars in benefits downstream.”

For more on the conference, see the following sources: