TAIWAN: A Group for UBI formed 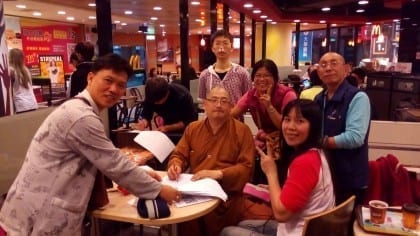 The second meeting held on 11th April in Taipei.

In Taiwan (the Republic of China), An association for an unconditional basic income has recently formed.

Activist Juku Shenguang started a facebook group for UBI in Taiwan on 14th February. The first offline meeting was held on 27th Feburuary, where 9 people turned up. The third meeting was held on 10th April with 25-30 people. The number in the facebook community has already grown to over 1700 and counting.

The group is currently starting the process of institutionalizing formally as a nonprofit organization. They’ve also started to collect signatures for an internet e-petition that asks the new government, which will begin serving in May, to endorse UBI.

Toru Yamamori flew to Taiwan to interview Juku Shenguang and other activists on 1st April. The interviews will be on Basic Income News shortly.