[Witten by Hosang Ahn, co-organizer of the BIEN Congress 2016]

Basic Income Korean Network (BIKN, president: Namhoon Kang) held the joint press conference to demand that the next National Assembly should discuss and legislate the basic income scheme on the 16th March at the city center of Seoul. Nine organizations including BIKN and some candidates for the general election who set forth basic income policy as election promise participated in it. They are Basic Income Youth Network, Catholic Farmer Association, Labor Party, Green Party, Cultural Action, Alba (part time job) Union, Left Youth and Co-op Gajangjari (fringe) except Korean Network.

Lots of political and social issues have risen as the general election in April is coming, among which the most important one is how to give all people the economic stability. Junghoon Park, president of Alba Union said “today unemployment is normal and employment is exception for part time workers, so they should be given stable income, basic income guarantee to protect their rights as workers.” And Namhoon Kang insisted “basic income guarantee is a sole way which we, human beings could live and survive as humans under the economic system Al would change.” Under these circumstances, Green Party and Labor Party, small and extra-parliament parties in Korea, promise basic income scheme their major policies, and some politicians in office interest in it.

Basic income guarantee has been just an idea in Korea up to recently, but now many consider it as a concrete means to overcome economic crisis and to give people material condition as they understand that other policies cannot work. Korean Network is going to organize various events to promulgate basic income idea and to make effort to institutionalize it. 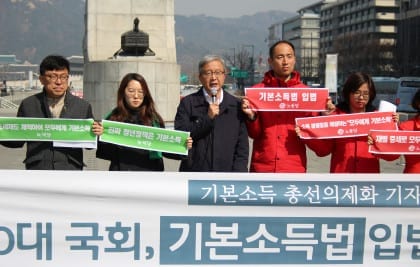