Daniel Häni, Philip Kovce: Was fehlt, wenn alles da ist? [What’s missing if everything is there?]

SUMMARY: In 2016, Switzerland is going to vote on a popular initiative that asks for the introduction of an unconditional Basic Income. Daniel Häni, one of the promoters of the initiative, wrote this book with Philip Kovce in order to gather support for the initiative. It is made for a lay audience rather than a scientific publication with some succinct arguments against popular criticisms of basic income, for instance that it would be killing personal initiative, promoting idleness, etc. The title gives an indication that the authors do not see the Unconditional Basic Income (UBI) primarily as a mechanism or institution to combat poverty. On the contrary: the UBI prepares for abundance which is the reality of modern societies (even if their actual structures do not yet correspond to this reality and still produce precariousness—but this is not the issue of Häni’s and Kovce’s book). By discussing these items as well as focussing on (paid) labour which our economic system is revolving around, they give several tips to rectify a number of current systemic prejudices: namely that within a society based on the division of labor, people do not work for themselves anymore, contrarily to all appearances; instead, all the others are working for oneself. Above all, the core questions of freedom and democracy are discussed: what are people going to do if they aren’t constricted to paid employment anymore? How will they materially realize this freedom? The main quality of the basic income scheme as discussed in this book is to raise these and other crucial questions for our present and our future.

Most of the arguments are known already from earlier publications and interviews of Daniel Häni, often in collaboration with Enno Schmidt, and in particular from the 2008 movie “Grundeinkommen – ein Kulturimpuls” [Basic Income—A Cultural Impulse]. As a matter of fact, the authors do integrate today more of the topics generally discussed in the context of the BI, above all in Germany, than they did some years ago. On the other hand side, they abstain completely from any discussion of the financing of the BI introduction, in Switzerland and in general. 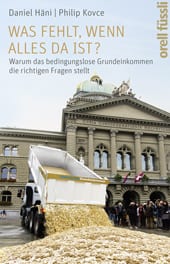