Basic Income as the Core of the Economy 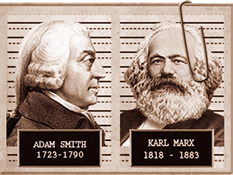 Adam Smith predicated his vision for a free market economy on the understanding that some constraints must be set in place to ensure all members of the society are self-sufficient and also, that they exchange only the surplus produce of their labour. He even went as far as to insist on division of labour being “designed” depending on the size of the market.

“When the market is very small, no person can have any encouragement to dedicate himself entirely to one employment, for want of the power to exchange all the surplus part of the produce of his own labour, which is over and above his own consumption, for such parts of the produce of other men’s labour as he has occasion for” – Adam Smith, “The Wealth of Nations”, Ch.3

But then Karl Marx (“The Capital”) convincingly explained that the condition for self-sufficiency cannot be satisfied, because workers have lost the means of production and are no longer self-sufficient. They depend for their survival on specialized division of labour that is imposed on them.

Is that the end of Adam Smith’s free-market or could such ideas be saved by the introduction of Basic Income? I believe the answer is “Yes, Basic Income can be the solution” and for the rest of this text I’ll try to explain why and how.

What is a human being to a business? For many businesses a human being is perceived as ‘a consumer’ at the output end of the businesses and as ‘a worker’ at the input end of the businesses. Therefore, it is in the best interest of the businesses to charge the humans as much as possible when they are consumers while paying them as little as possible when they are workers. The end result of such duality is, the humans suffer, businesses make profit; wealth concentrates, the people lose completely their self-sufficiency. Even now, we are making great strides in Intelligent Automation that, thankfully, is still managing to make good use of human talent, but for how long can this go on?

The matter can get much worse for the humans. Let’s just imagine a near future world (say about 50 generations from now) where automation has advanced to levels that resemble human-like Artificial General Intelligence (AGI). In such world, workers will no longer exist in any meaningful sense, because nearly all work will be done by a super intelligent automation. The businesses will perceive most human beings only as consumers. In such future, most humans will be jobless and, majority of us will have no means of production that can make us self-sufficient.

In our current society, humans without jobs (or income) become consumers without money. Consumers without money are useless to the businesses thus can be “discarded” (it means, literally wiped out of existence). How are we going to survive then? Perhaps, some of us could survive by reverting to violent redistribution of wealth (like war for example). Such approach creates too much suffering. The correct answer is we survive together, as one species, by introducing Basic Income. It must be sufficient to ensure the existence of a wide base of consumers who, in turn, will ensure the prosperity of the businesses and the society.

Do we need to wait for a future that has a human-like AGI before we consider Basic Income? Can we introduce it today and achieve great prosperity now? I believe the answers is, “Yes, we can have Basic income today” and we can have it in a way that is independent of political or technological circumstances i.e. a way applicable to any historical period. Let’s see how it can be done.

Who decides what a ‘dignified’ living is? Perhaps, a bunch of people, called a government, makes the decision while driven by their own ideas about what is ‘basic’ and ‘dignified’? Governments change, therefore, if the amount of Basic Income is determined by some political process (e.g. government’s budget justified by some ideology) then it is likely that Basic Income will turn into another tool to exert control over the people by applying control over the amount of BI.

Much more powerful approach is to implement Basic Income by using the free market as a base for estimating BI. Let’s call it Market Driven Basic Income (MDBI). The meaning of ‘Market Driven’ is that Basic Income will be an opposing market force to the leverage businesses (and other man-made constructs) obtain over the people due to their natural tendency to treat human beings with double standards (e.g. as ‘workers’ and as ‘consumers’).

MDBI can be defined as, the ‘most common’ outgoing spending amongst human individuals when seen as consumers and taxpayers. MDBI has to be derived from metrics that ‘capture’ only transactions from a person to a business, from a person to a government and from a person to any other ‘man-made societal construct’ (i.e. those metrics should reflect only the personal outgoing spending of the human beings, not metrics like gross output or GDI, or CPI, etc.). MDBI is a figure indicated, in part, by the free consumer markets showing what most individuals purchased the most and ,in part, by any other outgoing spending the individuals have (including taxes, fees, etc.).
With MDBI in place they (the businesses, the government, etc.) may even ask payments from us for the air that we breathe, it will make no difference to any of us as long as most of us have to make such payments, because such payments will become ‘common’ therefore “highlighted” to influence the MDBI.

Finally, to transform MDBI into Basic Income (BI) some adjustment may need to be made using the formula,
BI=MDBI+DI,
where, DI is a certain amount of Disposable Income. It drives the direction of the economy and determines its minimum speed.

The free market ideas of Libertarianism (laissez faire capitalism) imply that three components must be in place in a free market; a free transaction, a free producer and a free consumer. We must ensure the existence of free consumers before we can talk about true laissez faire free market for human consumers. BI, defined by using MDBI, ensures the existence of free-consumers. On the free market, the freedom of the consumer can truly be measured only by the amount of Disposable Income (DI) a consumer has. The consumer freedom is the disposable income a human being can afford to waste on (or invest in) whatever they like without affecting their normal life (think of DI as gambling money of sort that drive the economy).

Also, the DI adjustment to BI is necessary because the businesses will begin to create a gap between prices of products affecting the MDBI and the next-up version of the same products. Therefore, the amount of DI adjustment should be set to breach about 80% of that gap. If the gap is allowed to exist the economy will stagnate without the DI adjustment.

What is the meaning of the ‘most common’ in the definition of MDBI? I am sure statisticians may have a very good answer to that question. My guess would be, first, apply some good clustering algorithm to determine the categories of people’s outgoing spending and then find out which of these categories are common for, let say, 80% of the people.

Why would people want to work if BI is defined as previously described?
Well, the incentive to work will come from linking the Minimum Wage (MW) to the Basic Income using the following formula,
MW= K * MDBI,
Where, MW = is the minimum wage;
K = is a multiplier to represent the incentive for people to get a job. (For optimal results I recommend K=2)
That makes the total minimum income for a working person equal to =BI+MW =BI+2*MDBI or expressed otherwise = (1+K)*MDBI+DI.

In a world where “Space is the final frontier” we should try to create economic and political constructs that rise above simplistic views about our human nature, constructs that see our species as one sentient organism capable of reaching the stars and making the Universe our playground.