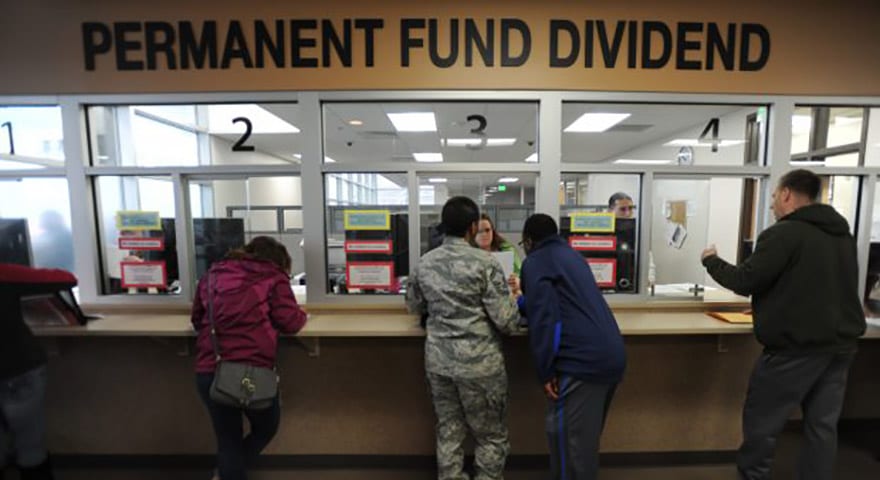 Alaska’s small basic income, the Permanent Fund Dividend (PFD), is coming under increasing political attacks as the state’s fiscal crisis grows. the dividend, in place since 1982, has been incredibly popular, but the double-hit of declining oil prices and declining oil production have created a fiscal crisis that has forced the state to look for new revenues. As Basic Income News has reported recently, both legislators and the Alaska public have shown an increased willingness to divert Permanent Fund earnings from the dividend to the state general budget.

As this year’s record-setting dividend checks of $2072 were being distributed, several editorials argued for reducing or eliminating the dividend and using that money to fill the state’s budget gap.

Craig Johnson, Chairman of the State House Rules Committee, recently spoke in defense of the fund, but went so far as to say only that touching the Permanent Fund should be a “last resort” that he does not support, “right now.”

Paul Jenkens, Tim Hale, and Mike Navarre have all written in favor of diverting funds from the dividend, and the Ketchikan Borough Assembly is considering a resolution urging the state to divert funds.

Some of the arguments are as simple as this statement from Tim Hale, “To me, it comes down to one thing: I’d rather lose my dividend than pay taxes.”

Hale’s attitude is very much the opposite to that of the founder of the dividend, the late Governor Jay Hammond, who believe that a dividend was far more important than a tax reduction. The dividend ensures that all Alaskans, rich and poor, share in the wealth of the state. Only people with substantial incomes benefit very much from lower taxes, and how much they benefit depends on the size of their income.