Review of “Give a Man a Fish: Reflections on the New Politics of Distribution,” by James Ferguson 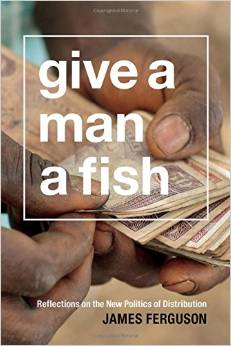 Give a Man a Fish: Reflections on the New Politics of Distribution, by James Ferguson (Duke University Press Books, 2015).

James Ferguson’s latest book focuses on the rise of social welfare programs in southern Africa, in the form of grants to low income and vulnerable groups, primarily the elderly, women and their children, and the disabled. Post-apartheid South Africa has led the way. It has an extensive system which administers grants to 30 percent of the population. Other countries like Botswana, Namibia, Lesotho, Swaziland, and Mozambique have also implemented nationwide programs, while pilot programs are being tried elsewhere in the region.

Ferguson’s goal is not to provide an extensive ethnographic treatment of these developments, but rather to analyze their implications and the field of political possibilities they might open up. Half comparative ethnography, half political pamphlet, Ferguson’s impressive narrative is a tour de force questioning, deconstructing and reconstructing classic and contemporary notions of poverty, development and the welfare state in the region and beyond. Through a focus on direct cash transfers, the author brings together the anthropology of southern Africa, with the latest debates in development practice and anti-poverty activism.

Written in a highly readable style, the book is structured around a series of self-contained chapters, originally given as the Lewis Henry Morgan lectures in 2009 at the University of Rochester. One can easily read the chapters independently or as part of a larger whole.

Ferguson’s starting point is the contradiction between dominant narratives on the relentless expansion of the neoliberal state, and the substantial extension of state social provisions through grants. The modest size of these social payments sets them apart from more comprehensive welfare measures in Nordic countries, yet the author believes that this phenomenon marks the rise of what can be legitimately called “welfare states” in southern Africa. While their impact might be limited in the present form, the systems in place lay the foundations for more radical possibilities.

Breaking away from conventional welfare and poverty interventions, grants are not delivered with the final goal of reproducing a healthy and productive workforce in the cities, or creating a class of productive farmers in the rural areas. The eligibility criteria are simple – mostly age for pensions and child care grants – and do not include conditions like searching for employment or investing in productive activities.
This hints at economic structures that affect the vast majority of southern Africans: the rural areas are witnessing a constant decline in agricultural production, while the formal sector in urban areas, even when experiencing high growth, simply fails to absorb most people who are in need of employment. Far from being a temporary situation that can be rectified through economic policies, this is a chronic feature of contemporary capitalism in southern Africa and increasingly in other parts of the world, including Northern economies like the US and Europe.

The author points out that production remains the dominant paradigm in economic anthropology, development discourse and practice, and radical left thinking. He calls for a radical shift away from “productionist” tenets towards distribution. His wide-ranging critique builds on a re-elaboration of key themes in classic and contemporary southern African ethnography, from kinship-based reciprocity across the rural-urban spectrum to a mix of moral and economic concerns at play in sex, love and intimacy in times of precarious livelihoods.

The “distributive political economy” mapped by Ferguson is characterized by a myriad of acts of wealth distribution, entangled in multiple and complex relations of dependence influenced by configurations of gender, kinship, labor, community, ethnicity, society and the state. Rather than producing more wealth, this “distributive labor” is primarily directed at dividing sources of wealth into “smaller and smaller slivers as they work their way across social relations of kinship, clientage, allegiance, and solidarity” (p.97). It is this kind of activity that sustains and reproduces society, more than engagement in production as defined by macro-economic frameworks centered on the labor of able-bodied men in the formal sector and the reproductive work of women as wives and mothers. One powerful example of this reversal in South Africa is the shift from dependence of women, children and rural relatives on remittances from men working in the mines in the heyday of the apartheid economy, to the central distributive role played today by women and elderly people. The latter are the main beneficiaries of state grants, and disenfranchised men at the margin of the productive economy have increasingly come to rely on them.

Establishing and maintaining dependence on others who have access to wealth becomes a full-time job for those who are excluded from the benefits of middle class life. Dependence, in Ferguson’s treatment, has more to do with sharing than either gift or market exchange. Sharing and dependence cannot be easily subsumed under the conventional opposition between equality and inequality. These relations hint at a “new politics of distribution” beyond these two poles.

Within this framework, Ferguson convincingly reinterprets varied political movements calling for redistribution in the region, from the populist socialism of new radical movements in South Africa to the region-wide basic income grant campaign, and debates around land reform and resource nationalism. Calls for redistribution go beyond narrow views of African patrimonialism. People demand what Ferguson labels their “rightful share” in wealth that is owned collectively. Legitimate participation in this process can be framed along citizenship lines at the state level, but there are other levels of belonging too when local communities and traditional leaders are involved. These claims are not exercised from a position of inferiority or supplication. People own collectively all the resources of their community of belonging, hence they have a claim to a share of the wealth produced from these resources.

By inserting the normative and political dimensions of these movements into a long history of local idioms and practices, Ferguson provides a different angle on activist discussions around radical measures like the basic income grant (BIG). BIG is argued from a variety of perspectives, ranging from radical Marxism to left-leaning libertarianism and technocratic social democracy. The distinctive feature of a basic income is that it should not be tied to any condition and everybody should be entitled to it. The ideal world imagined by BIG activists is one where all human beings receive a basic income that would afford them a decent livelihood, with no compulsion to work for a wage or generate income through other activities. This is a radical break from existing welfare measures that tie unemployment benefits to the reintegration of beneficiaries in the labor market. In line with other activist scholars, Ferguson notes that these emerging state systems of cash distribution provide an essential infrastructure for the possible establishment of BIG. At the same time, his anthropological analysis develops moral and political arguments in favor of BIG that are grounded in local discourses and aspirations, a dimension often missed by global activist groups and regional campaigners.

Ferguson joins a growing number of anthropologists who subvert the conventional boundaries between analysis and engagement. With his creative and flexible analysis, he provokes thinking for action beyond narrow ideological boundaries. One could imagine enthusiastic endorsements of his work by Marxist campaigners, World Bank technocrats and traditional leaders alike. This highly original book is likely to leave a lasting mark not only on contemporary anthropological debates around poverty and development, but also policy and activist thinking in southern Africa and beyond.

This review was originally published in Anthropology Book Forum.