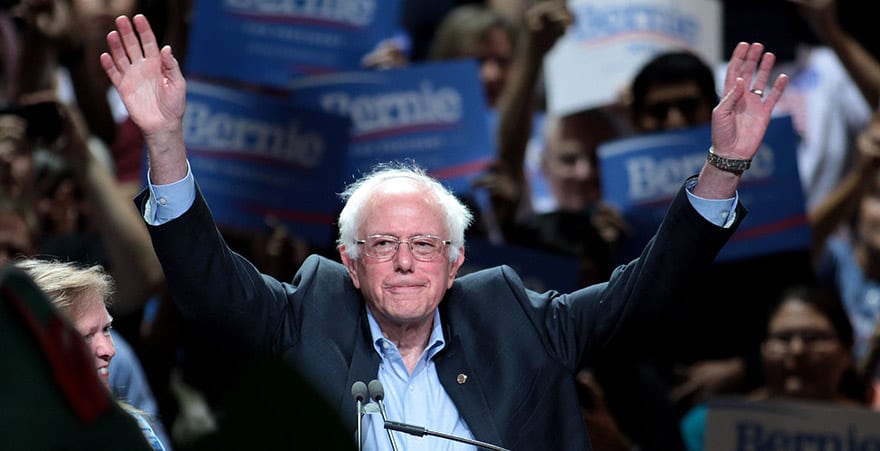 In an interview with Ezra Klein of Vox published on July 28, U.S. presidential candidate Bernie Sanders was asked pointedly about basic income. His response this time was more specific than his answer when asked about basic income on Reddit a year ago, but it was still rather vague.

Early in the interview, Sanders endorsed a single-payer healthcare system, which is an unconditional and universal program. He went on to say:

It seems to me that when you look at basic necessities of life — education, health care, nutrition — there must be a guarantee that people receive what they need in order to live a dignified life.

Let me end on a question about a policy that is getting, seems to be, some momentum but it’s not often talked about in Washington, which is a universal basic income. You’ve begun to have people go back to both Milton Friedman and Martin Luther King Jr., saying we should really have a fundamentally guaranteed standard of living in this country.

Here’s the point. This is the wealthiest nation in the history of the world, but nobody in America knows it because their standard of living is going down and almost all of the new wealth is going to the top 1 percent. That is an issue that we have to deal with.

In the wealthiest nation in the history of the world, the top one-tenth of 1 percent should not own almost as much wealth as the bottom 90 percent. Everybody in this country should in fact have at least a minimum and dignified standard of living. All right?

He didn’t specifically mention any unconditional programs and he specifically proposed expanding two conditional programs (Social Security and the Minimum Wage). Therefore, he indicated that basic income is not high on his agenda. He appears to be trying to attract basic income supporters to the idea that the conditional approach can achieve their goal of meeting everyone’s needs, if it is expanded and made more generous. However he might also be implying that he would be interested in basic income if it had sufficient public support to become a political reality. The facts that major-party presidential candidates are being asked about basic income and that some are responding sympathetically is taken by many supporters as an indication of the increase in the political viability of basic income.

The full Vox interview is online: