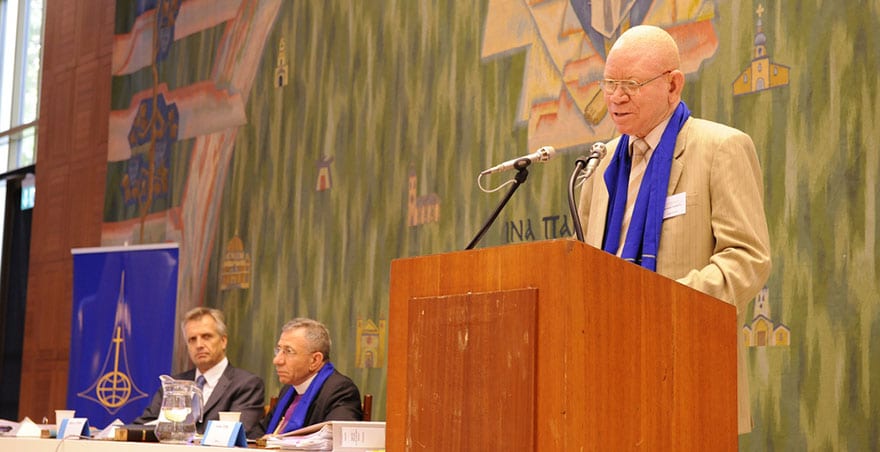 A new hope that basic income will eventually be implemented by the government is raising in Namibia as the newly elected President Hage Geingob has committed to fight poverty and has designated former bishop of the Lutheran Church of Namibia and longtime basic income supporter Zephania Kameeta as minister of a new Ministry Department solely dedicated to Poverty Alleviation.

The new President Hage Geingob won the presidential elections with 87% of the vote on 28 November 2014. He belongs to the ruling Center-left SWAPO party which also won the parliamentary elections with a comfortable 80% majority.

Zephania Kameeta is known to be one of the pioneers of the Basic Income Grant (BIG) Coalition which started a worldwide known basic income experiment in the rural town of Otjivero in 2007. He even influenced the German Protestant Church in their move in support for basic income, BIEN Germany’s Ronald Blaschke reminded in a recent blog post. Kameeta has repeatedly pushed the government to step forward the idea.

Namibia’s new president, Hage Geingob is also one of the few leaders of the country who is interested in basic income. He openly supported the idea when he was Trade and Industry Minister and was among the first persons to donate to the BIG pilot project fund in August 2007.

“Poverty is a curse, I would therefore like government to take up the proposal of the Council of Churches of Namibia and pay out a basic income grant to all Namibians who do not have a source of income,” Geingob said in the National Assembly in 2007.

Although no announcement has been yet made about basic income by the new government, the political moves foster hope that BIG might be a step closer to becoming a national reality in Namibia. The idea already seems to show strong support among its citizenry, with more than 78% of Namibians supporting the idea of the Basic Income Grant, a recent opinion poll concluded.

Uhuru Dempers, a development activist who campaigns for BIG, told national media New Era that a ministry for poverty eradication is a positive development. “We hope that with the coming on board of Kameeta, there will be a debate on BIG as one of the models of addressing poverty,” said Dempers.