GREECE: Is Syriza about to implement a basic income? 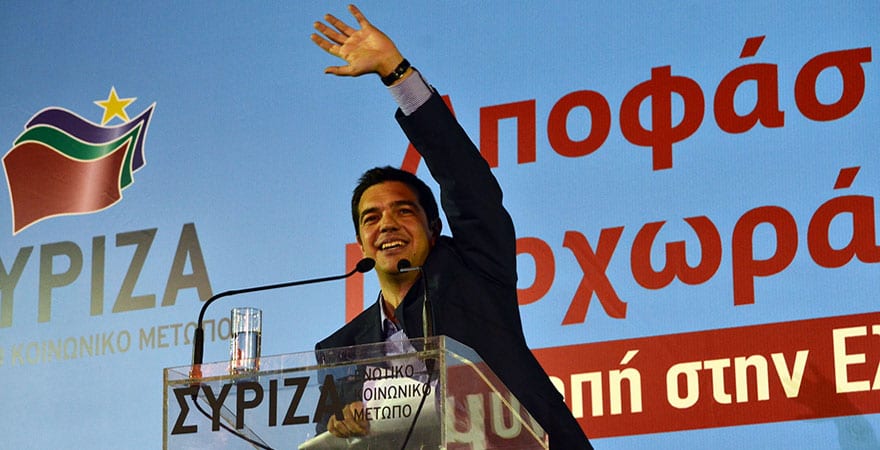 By including a paragraph mentioning “basic income” in a letter to the ministers of the eurozone, SYRIZA’s government seems to be looking forward to examining the possible implementation of a national basic income scheme. But the details of the scheme remain completely unknown for the moment.

Last wednesday, Greek Finance Minister Yanis Varoufakis sent a letter to all the finance ministers of the euro zone including a list of reforms the Syriza government commits to implement, in an attempt to get an extension of the bailout program the country is currently bound to.

Establish a closer link between pension contributions and income, streamline benefits, strengthen incentives to declare paid work, and provide targeted assistance to employees between 50 and 65, including through a Guaranteed Basic Income scheme, so as to eliminate the social and political pressure for early retirement which over-burdens the pension funds.

The sentence was immediately picked by Business Insider’s Tom Hirt who seems to be assuming that the Greek government is actually planning to implement a basic income “granted to individual citizens, without means testing or having a work requirement”.

While the article went viral on the internet, we still do not know what exactly the Greek finance minister had in mind when he included the term “Guaranteed Basic Income scheme” in the letter, especially as the sentence sends mixed feelings on whether the plan would include all the population or just a targeted age group, and if it would include conditions or not.

This would not be the first time the term ‘basic income’ has be confused with similar yet different ideas, such as the guaranteed minimum income which is usually understood as a means-tested scheme, attached to work requirement, rarely fully universal, and not granted individually – as opposed to BIEN’s definition of the basic income.

So far, Syriza has never publicly discussed or pushed for the idea of the universal basic income, although it did try to pass a legislative initiative in favour of a means-tested minimum income back in 2005 – unsuccessfuly. As a matter of fact, the idea of basic income does not seem to have spread so much among the party’s membership.

Noteworthily, Greece is one of the few EU countries which do not have yet a guaranteed income scheme.

In november 2014, minimum income pilots projects were started in Greece. It concerns 13 municipalities all over greece, in which 7% of the population of each municipality was selected with criteria (income and unemployment).

Those programs are part of the memorandum of understanding between the Greek government and the so-called Troika (IMF, ECB, and the EU Commission) in an attempt to push Greece towards the implementation of a minimum income.

Interestingly, Greece’s letter to the EU also promises to “Evaluate the pilot Minimum Guaranteed Income scheme with a view to extending it nationwide.” However, the newly elected minister of labor Panos Skourletis has already put on hold the pilots, soon after taking his new position.

While the current political situation in Greece might turn out as an opportunity for basic income, there was no big win just yet. We will look forward to get more information from the actual intentions of the new government.