Podemos, a new Spanish political party that includes unconditional basic income (UBI) as won of its main economic policy objectives, has one five seats in the European Parliament. Organized barely three months before elections for the European, the party seemed to come out of nowhere to a win nearly 8% of the vote (1.2 million votes) and finish in fourth place in the elections held on May 25, 2014. 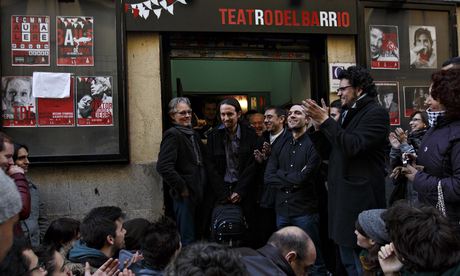 "Podemos' leader Pablo Iglesias, centre, is applauded as he introduces the fledgling party in Madrid, Spain, earlier this year." Photograph: Andrea Comas/Reuters -via the Guardian

Podemos (which means “we can”) grew out of the anti-austerity protest movement known as Indignados. It claims to be a party of ordinary citizens who desire a fundamental change in the political process toward greater democracy, freedom, and social protection. The Guardian quoted the Party’s leader, Pablo Iglesias, “It’s citizens doing politics. If the citizens don’t get involved in politics, others will. And that opens the door to them robbing you of democracy, your rights and your wallet.” Party leaders promise to accept a salary of no more than three times the Spanish minimum wage.

The party also supports doing away with tax havens, a maximum salary, the reduction of the working week to 35 hours, more protection for workers against dismissal, and lowering the retirement age to 60. According to GlobalVoices, “The objective [of Podemos] is to dismantle the austerity measures put in place by the different governments that have been in power. To strengthen and increase citizens’ rights to political participation, education, housing, health and the fight against corruption are the core elements of the party’s programme.”

For more on Podemos, see the following articles:

Thomas G. Clarke, “How the rise of Podemos in Spain should be an inspiration for the progressive left in the UK.” Another Angry Voice. May 28, 2014

Ashifa Kassam, “Podemos hopes to cement rise of citizen politics in Spain after election success.” The Guardian, 27 May 2014