OPINION: The Liberal Case for a Basic Income 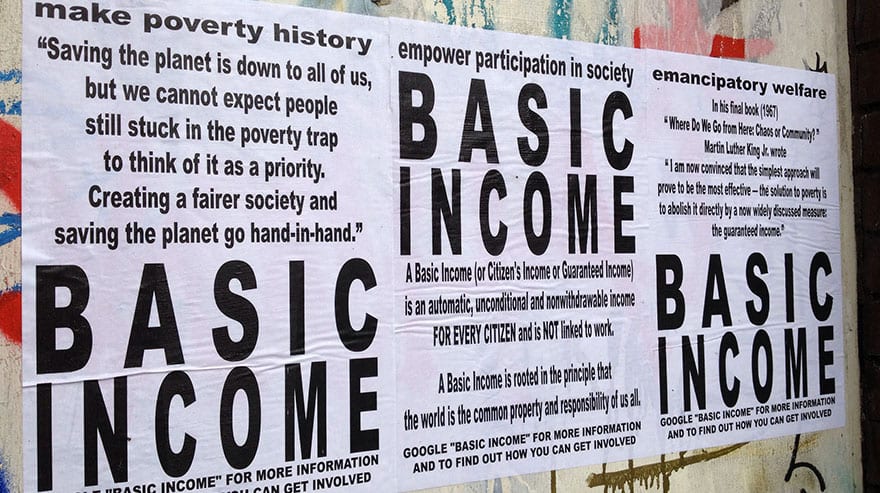 Max Sawicky’s post on the liberal case against a universal basic income (UBI) characterizes the rationale for UBI as poverty elimination at low overhead cost. While he’s right that this is one of UBI’s benefits, he misses its much larger goal. What distinguishes UBI from the anti-poverty programs we already have in the US is that it eliminates poverty through redistribution that is explicitly unconditional and universal—it goes to everyone, whether or not they work or are looking for work. Low overhead costs are simply a bonus of abandoning the means-testing and monitoring of work effort that are the foundation of all the programs Sawicky wants to expand.

The idea of unconditionality is counterintuitive. Work makes our riches possible, and all should contribute, if they can, to that work. UBI does not reject this principle of reciprocity, but challenges the priority of that contribution: should subsistence be conditional on work first, or should subsistence be guaranteed to all first, and work for anything more come after basic needs are met? Clearly, throughout most of human history, when life was dominated by scarcity of resources, the answer was the former. But why should that be the case in post-scarcity societies?

For some, the problem with unconditionality is not the fear of freeriding, but of abandoning efforts to provide meaningful and rewarding work for all. It’s easy to imagine the dystopic scenario in which millions are mailed monthly checks to stay home so we don’t have to create jobs for them, or provide childcare, or invest in the infrastructure required for a thriving economy. Just let the bankers do the work and pay the taxes that fund everyone else’s UBI. But that’s not so different from the welfare state we have now in the US—except that without the UBI, 50 million Americans live below the federal government’s wholly inadequate poverty threshold.

Advocates of UBI envision a society in which absolute poverty is eliminated and productive and rewarding work is defined and shaped by individuals, not the government. Anyone who wants more than the minimum provided by the UBI will need to work, but the UBI will give them what sociologist Erik Olin Wright calls “a permanent strike fund.” They’ll come to the labor market with leverage to negotiate better wages and working conditions for unappealing work, and with funds that make more rewarding but lower paying work feasible. Those who perform unpaid care or voluntary work will have an income without the government monitoring their performance in exchange for a stipend. Time spent on education and vocational training will no longer have to be weighed against earning an income to live on. Entrepreneurs will have a bit of venture capital with which to support themselves while they try out a business. Higher wages at the bottom of the wage scale will cause more automation of the most routine jobs, but the labor savings are shared with all through the UBI.

A utopian fantasy? Hardly—but a more democratic and pluralistic version of what we have now. Income inequality remains, but those at the bottom of the income scale have their basic needs met without having to prove their deservingness. Gender inequality remains, but women receive, on balance, a redistribution of income from higher earning men whether they work or not. Children go to school with full stomachs and warm clothes, and have more of a chance to use their education to improve their lot in life. Most importantly, citizens are no longer divided into groups vying for a bigger share of a stigmatized social assistance budget, but a unified force with the political clout to defend and expand the UBI. Individuals freed from the constraints of poverty help shape the contours of the economy through their inalienable and renewable economic “votes,” as they do in the political sphere. Like political democracy, it’s not perfect, but it’s better than the alternatives.

How do we get there? Not by expanding the programs Sawicky lists, which even if expanded and more generously funded will inevitably exclude some from coverage. Instead, we should push for a UBI modeled on the one he doesn’t mention but which happens to be the strongest anti-poverty program in the US—Social Security. Social Security is the closest thing we have to a universal benefit in the U.S. It’s not unconditional, but it’s inclusive eligibility rules mean that almost 90% of seniors are covered by it. Because it’s paid individually, it provides an independent income to spouses of covered workers even if they’ve never been employed themselves. Because it’s not means-tested, it doesn’t create a disincentive toward other forms of retirement savings or earned income. And because it’s nearly universal, it creates a powerful solidarity among its recipients that has successfully resisted calls for its defunding in the name of deficit reduction or “privatization”—unlike the fragmented, stigmatized, and politically powerless recipients of the programs Sawicky thinks we should expand.

The UBI should be universal, unconditional, individual, and untaxed. Income above the UBI should be taxed progressively, with steeper increases above median income. To more effectively target child poverty than a $10,000 adult-only UBI would do, the UBI should go to children as well and be pegged to the poverty threshold of a family of four—a minimum of $6,000 per person. To the extent that they pay lower benefits than the UBI, other programs can be eliminated and their budgets used to fund it. For those that pay higher benefits than the UBI, as Social Security does for many recipients, their budgets can be reduced to the supplemental amounts alone, with the savings used to fund the UBI. Additional funding can come from phasing out the $100 trillion in tax credits that go overwhelmingly to taxpayers with incomes far above the poverty line. And yes, we’d probably still have to raise taxes on the wealthiest Americans. But, as with the payroll taxes that fund Social Security, we’d know exactly where those taxes are going—to eliminate poverty.

Many on the right object to redistribution on any terms, but as Sawicky notes some on the right see UBI as the form of redistribution least disruptive to the market, and so prefer it to minimum wages, closed union shops, and employment stimulus programs that favor certain industries over others. This “market efficiency” aspect of a UBI could be the key to a bargain between the left and the right to guarantee all Americans economic security. It would be ironic if it turned out that the left was more attached to a punitive and stigmatizing welfare state than the right.

This article was written by Almaz Zelleke.