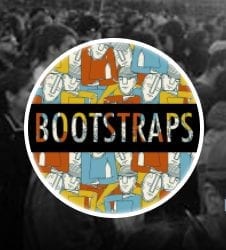 As the debate about basic income heats up around the world, two documentary filmmakers are trying to bring the human element to the forefront.

Deia Schlosberg and Conrad Shaw are producing an ambitious documentary, “Bootstraps – A Basic Income Film”, that will follow a group of real people around the United States who will receive a basic income for two years.

I recently interviewed Schlosberg and Shaw as part of the new BI News Podcast series. Schlosberg said she wanted to do something different from existing basic income documentaries.

“I didn’t want to make another film that was just describing it and talking about the theory, I wanted to follow individual people and tell stories about individuals, and connect with the audience that way,” Schlosberg said.

Shaw said this project will be distinct from existing basic income trials, and will fund a basic income for around 15 to 20 individuals selected for the documentary.

From those a “handful” will be selected with the most “compelling stories,” Schlosberg said. Their intention is to stop the “othering” that takes place in society, they said.

“The problem we see with the pilots that are going on…is that they are very localized,” Shaw said. While this will allow the research to be more rigorous, he said, it makes it more difficult to present an inclusive ‘American pitch’ with people from all over the country.

The team is in the process of fundraising and is in the early stages of selecting participants for the basic income. Those that are part of the mailing list for the film will be eligible for a drawing that will allow them to nominate someone to be part of the film and receive a basic income.

As of now, they hope to start handing out the basic income this summer and release the documentary in time to be “part of the election discussion” in 2020.

Schlosberg has worked on films in the past, including “Backyard” and “How to Let Go of the World and Love all the Things Climate Can’t Change,” but she said this documentary will be a unique experience following individuals for two years.

Already, Shaw and Schlosberg have found potential participants for the film including a homeless man from the east coast who was released from prison, and a man in Boston who is still in prison and declined parole because he is “afraid” of not being able to reintegrate into society.

“With those we are exploring recidivism and how basic income could ameliorate that issue on a huge scale,” Schlosberg said.

The goal, they said, is to get people from all different backgrounds, locations, and occupations so “they can watch the film and relate.”

In administering the basic income, they said they are currently looking for an outside organization to partner with on this aspect.

In making this documentary, they want to discover whether critics are correct in that basic income will make recipients lazy, or if it will encourage positive change.

For the full podcast, listen here.