Why I March for Basic Income 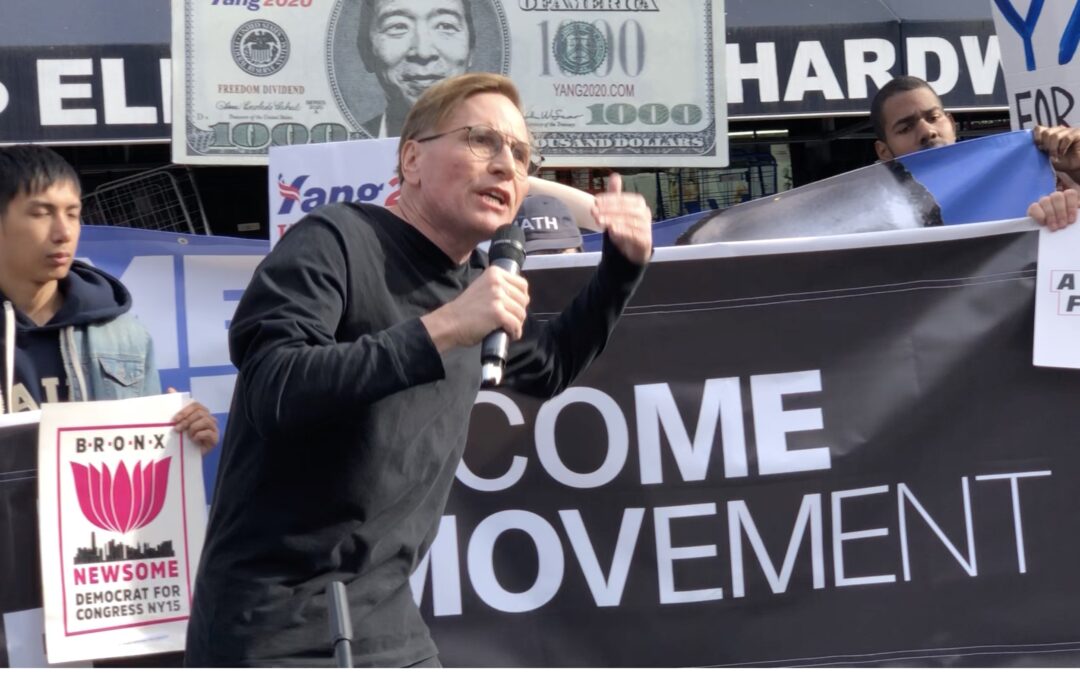 I march for UBI because it’s wrong to come between anybody and the resources they need to survive and that is exactly what we do in just about every country in the world today. Poverty doesn’t just happen. People don’t get themselves into poverty. Poverty is a lack of access to resources. The world is full of resources. The only reason you can lack access to the resources you need to survive is because somebody else controls them whether it’s an owner, whether it’s a politburo or whether it’s a bureaucracy. It doesn’t matter who controls them. If it’s not you and they say you can’t use them unless you do what we say, you are not free.

Freedom is independence. Freedom is the power to say no to anybody who wants to give you orders. But we’ve set up the world so it seems so natural that some people should just own the earth. And the rest of us, the 90%, the 99%, we all have to go to them to get our job or we have no resources to keep us alive. And we call that “work.” We act like there’s no other kind. As if the only thing work could possibly mean is going and taking orders from somebody who has more privileges than you do. Working for yourself has become impossible. It’s been impossible since we kicked the peasants off the land and enclosed the commons. Working for yourself has been impossible since we killed the buffalo. Working for yourself has been impossible since we abducted the slaves. And the freed slaves knew this at the end of the Civil War. That’s why they asked for 40 acres and a mule. Unfortunately, their masters knew it too: that’s why they didn’t get it.

There’s nothing wrong with a job. Jobs don’t make you unfree. What makes you unfree is when instead of saying I want you to work for me so I am going to pay you enough that you’ll want to work for me, they say I’m going to take everything starve you into submission. A small group of owners took all the resources. They didn’t invent these resources. These resources were here before all of us. And this group of people, this tiny little privileged group of people are going to take all the resources and they are not going to share with anybody until the people who have nothing provide services for the people who already own everything. That’s why when you control resources, you don’t get just the resources; you get to control other people.

They’ll tell you they’ve paid for those resources. No, they paid the last guy who owned them. They didn’t pay all of us who don’t own any resources. If you want to take a part of the earth that was here before you, you’ve got to pay back, provide a service for those who own nothing. That’s why you have to pay a tax on resources and the distribution of the revenue from that tax has to be unconditional.

We pretend we’re free because we have a choice of which one of these property owners we can work for. A choice of masters is not freedom. Freedom is independence. Freedom is the power to say no to anyone who would want to be your master. When you establish that, everybody gets some of the value of the resources of this earth, enough to live in dignity, enough to survive, enough that you don’t have to work unless somebody makes it worth your while. Oh, but they will say: All those lazy workers won’t work if you do that.

Notice how it’s always lazy workers and never cheap employers. No, that’s never said. So what we’re really doing when we say this, is we’re taking sides in a dispute. When somebody offers a job and somebody else doesn’t want it, that’s a dispute about wages and working conditions. Everyone has their price, right? So, if there’s a good price, people will take it: Good wages, good working conditions. Someone will take that job. But if we say whatever the wage is, if you don’t take that job you’re a lazy worker. Never a cheap employer. It’s like we’re looking at a dispute and pretending it’s not even a dispute. We’re pretending that only this side counts. We’re taking sides in a dispute, and we’re siding with the most privileged person. We’re morally judging the weakest, the least powerful person, the most vulnerable person, and leaving the privileged people beyond reproach, as if they’re not even a party to a dispute.

And that’s based on a ridiculous assumption that the privileged people of the world, whether they’re in government or whether they’re private resource owners, they get to judge everybody else. They get to judge the weak and the vulnerable. They say: you deserve to live; you don’t. You go be homeless, you go eat out of dumpsters or do whatever else you have to do to keep yourself alive. That is the ridiculous assumption that there is anyone who doesn’t deserve the basic resources that they need to survive. And they decide who’s deserving on the self-serving assumption that privileged people have the right to judge whether unprivileged people deserve to survive. Those assumptions are self-serving to begin with. And look how self-servingly they use that power! In practice, the number one thing that we ask of the poor is, “if you’re truly needy, are you willing to work for the rich?”

Are you willing to work for people who own property? That’s what you’ve got to do to prove that you’re worthy. That’s so self-serving on the part of the privileged. And for almost all of us, it’s self-defeating, because most of us don’t have enough property to work for ourselves. The vast majority of us have to work for someone who owns enough property to hire us. By creating the situation where the more privileged to get to block the less privileged from the resources they need to survive, we’ve created a situation where just about everybody has to work either directly or indirectly for the wealthiest of us.

And that creates this terrible work incentive problem. When they talk about incentives, they only talk about the incentives for those lazy workers to work. What about the incentive for those cheap employers to pay good wages? That incentive problem doesn’t just affect the people at the low end. 41 years ago, real per capita income was half of what it is now. That means we could all be working half as much and consuming the same or we could be working the same and consuming twice as much as we did 41 years ago. But most people are working just as much as their parents were 41 years ago and consuming little if any more than their parents did 41 years ago. We’ve had all this economic growth all this automation in the past 41 years and the benefits have all gone to the top 1%. Basic Income is not just for those other people at the low end, it’s for everybody who has no other choice but to work for a living.

We have owed each other a Basic Income since we enclosed the common lands, since we abducted the slaves, since we killed the buffalo not because some long-dead person stole something from some other long-dead person but because they created a system that privileges some, impoverishes others, and corrupts us all. We all owe each other a Basic Income now. That’s why I’m marching today and thank you for joining me.
–Karl Widerquist, the Bronx, New York, October 26, 2019, final edits St. Elizabeth’s, Napoleon Avenue, New Orleans, September 13, 2020

All the images and videos above are by Ching Juhl of Juhl Media.

Pierre Madden, transcribed this text, did some of the copyedting.