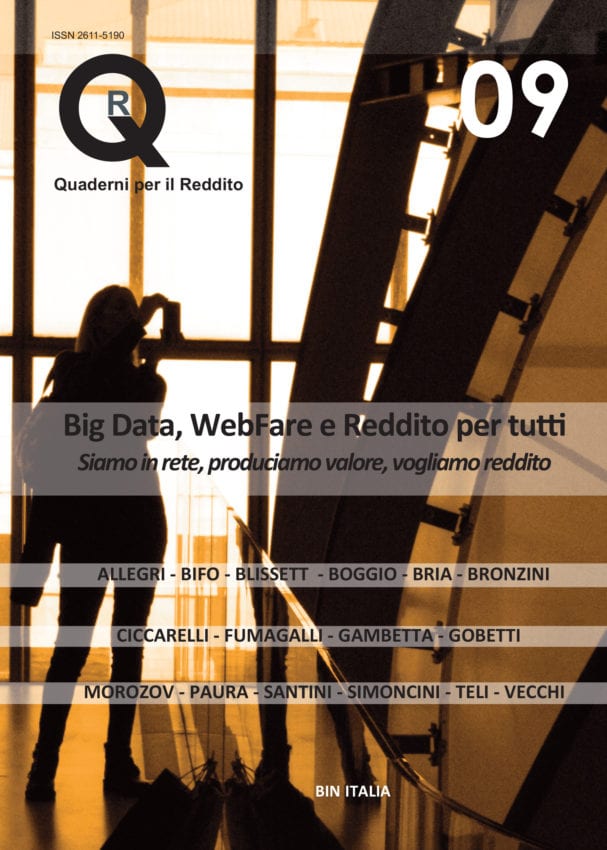 Basic Income Network Italia (BIN Italia) has released a new editorial production. Titled “QR9 (Quaderni per il Reddito) – Notebooks for Income: Big Data, WebFare and basic income for all! We are on the net, we produce value, we want basic income“, it’s freely accessible over the Internet.

This publication (March 2019) features 16 authors, offering different perspectives thanks to an included variety of articles written by several italian and international authors.

As reported in the back cover: “Today the Capital expresses its value and lives within neurons and silicon and this evolution changes the relationship between Labor and Capital. Identifying a sort of WebFare Manifesto, could mean a new speech to claim an unconditional basic income, the fruit of our being connected to the network”.

Sandro Gobetti and Luca Santini, “We are connected. Basic income and WebFare for all
Andrea Boggio, Big Data & Digital Labor”
Benedetto Vecchi, “The basic income between technocapitalism and social fragmentation”
Roberto Ciccarelli, “Why unconditional basic income and self-determination is a political revolution”
Daniele Gambetta, “From the network to the social network: self-determining the discourse”
Francesca Bria and Evgeny Morozov, “Digital rebel cities claim a New Deal on data”
Stefano Simoncini, “Populist Machines. The challenge of basic income and technological sovereignty between local and transnational”
Maurizio Teli, “WebFare, digital identity and collective freedom”
Andrea Fumagalli, “Network value and basic income: from the WebFare to the commonfare”
Roberto Paura, “From basic income to Universal Basic Assets: a manifesto for equity in the 21st century”
Giuseppe Bronzini, “Social cooperation between the big data economy and basic income”
Giuseppe Allegri, “The great convergence for basic income in the digital age”
Franco Berardi Bifo, “Thinking about basic income in the horizon of collapse”
Luther Blissett, “WebFare: income for all and all platforms for users!”