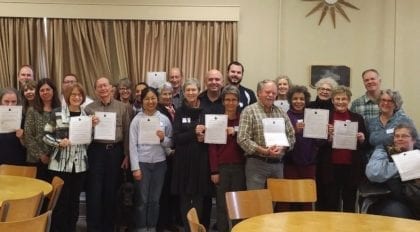 On November 4th 2017, the Ontario Basic Income Network (OBIN) held its annual meeting in Lindsay, Ontario, Canada. Lindsay is one of the sites of the Ontario basic income pilot project, with approximately 2,000 residents registered in the experiment. Delegates at the November 4th meeting unanimously passed “The Lindsay Declaration for a Progressive Basic Income.”

The Lindsay Declaration draws from human rights outlined in the United Nations Universal Declaration of Human Rights and the Canadian Charter of Rights and Freedoms. It also highlights what it considers the benefits of basic income and the momentum built by the Ontario government’s three-year basic income pilot (ongoing).

After the meeting, delegates voiced their intention to use the Lindsay Declaration as a tool for basic income advocacy across Canada. The Declaration has received attention from regional news and social media.