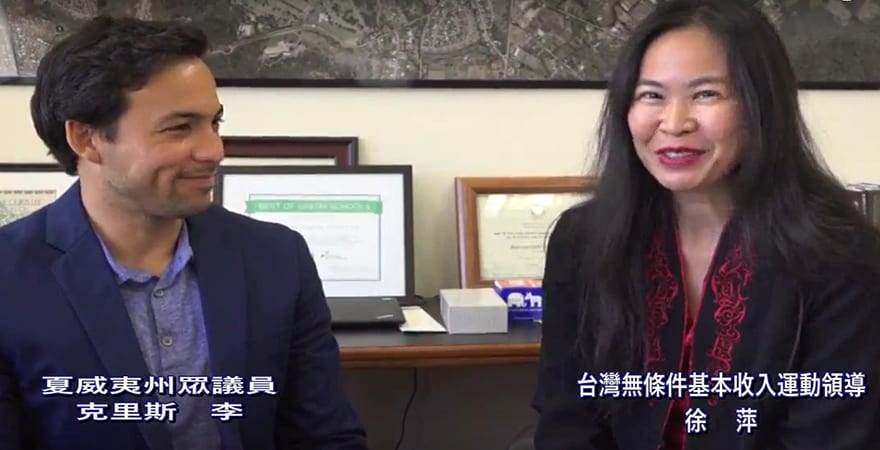 Representative Chris Lee first encountered the concept of Basic Income on the Reddit Basic Income group, and since then has been interested in the topic. According to Representative Lee, the state of Hawaii needs to think about Basic Income with some urgency for reasons related to its economy, which is mostly based in the service industry. Hawaii’s flourishing tourist market and its physical isolation combined make the state’s cost of living much higher than what the local residents are able to afford. Lee mentions several situations, from homelessness, to people who are not able to retire, to younger residents who have to live with their parents for much longer than would be desirable, and yet others who have to leave the state and move away from their families. Basic Income would be a way to guarantee that the local economy could benefit and work for everyone and that Hawaii natives and others can live in the state while being able to pursue their dreams and their passions, and that no one is left behind.

Hawaii, being a service based economy, could be hit hard with the new wave of automation that is focusing on innovation applicable to the retail industry. This however can be seen as an opportunity to change the nature of work for Hawaii’s residents. Representative Lee argues that the millennials look for meaningful work that is more than just a paycheck. According to Lee, 51% of all millennials don’t believe in capitalism as is right now. Millennials would like to redefine the american dream. The american dream is “no longer to seek out the best job that pays the most, but it is rather to find the job that provides the best meaning and quality of life.” Basic Income is “a mechanism that empowers people to have that opportunity in the face of a changing economy.” Furthermore, with the innovations in automation, traditional safety nets such as welfare, food stamps, and housing assistance, can make government expenses skyrocket in the near future. Basic Income could be a policy that is cheaper to implement in the long run. For all these reason, Representative Chris Lee is supporting Basic Income in Hawaii and was able to pass legislation that will create a working group to officially look at Basic Income as a solution, looking for a better future in the state of Hawaii.