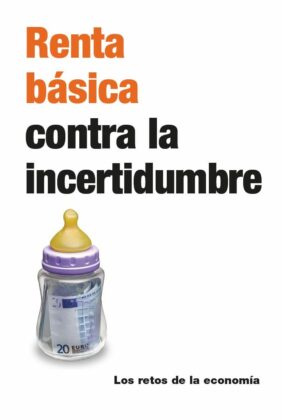 The Spanish publisher RBA has just released a new book by Daniel Raventós, Renta básica contra la incertidumbre (Basic Income against Uncertainty), in its “los retos de la economía” (Economic Challenges) collection. The book updates the most important developments in basic income and discusses recent writings. The collection, in which the book is included, is not academic, but one which presents the basic elements of today’s concerns (inequality, the welfare state, and so on) to non-specialist readers, in such a way as to serve as a basis for further study.

Raventós’ book not only discusses the theoretical issues of basic income, but also gives an account of the social and political situation which has led to this proposal becoming widely known and regularly debated in social movements, the media, political parties and trade unions. Just a few years ago, this was unimaginable. Some people were complacently asserting that basic income could never be openly recommended because it would “shock” or “repel” the population, or at least a good part of it. It would have to be introduced, if at all, through the back door.

Well, we have lived to see the day! Here we offer an extract from the introduction of Renta básica contra la incertidumbre, which will soon appear in an Italian edition. The book has six chapters in which Raventós discusses the normative aspects from the standpoint of political philosophy (with particular reference to property and freedom); how basic income has been received in social movements like feminism and environmentalism, as well as in trade unions; how to finance it; experiments with basic income in various parts of the world; the role of basic income in an increasingly unequal world, in which mechanisation is advancing at a dizzying pace; and the paradox of support from both the right and left.

“Basic income will be paid out to people simply because they exist as citizens or accredited residents, independently of gender, ethnic group, income, sexual orientation, religious affiliation or lack thereof. Hence, like universal democratic suffrage, basic income is a proposal with the formal characteristics of laicism, unconditionality and universality.

Basic income has to confront considerable intellectual, social, philosophical, economic and political resistance, often in the form of questions. Is basic income a just proposal? Do people who disdain a salaried job have the right to an unconditional cash transfer? Will it abolish poverty? Aren’t the usual welfare state conditional cash transfers a better way to combat poverty? Will people get or stay in jobs if they have a basic income? Wouldn’t it be better to aim for full employment? Would workers have better bargaining power if they received a basic income? How would basic income affect migratory flows of impoverished people from poor countries to rich countries? Would everyone, both rich and poor, gain with a basic income? Would or wouldn’t women benefit from a basic income? Given the threat of robotisation in many areas of work, does basic income have something to offer?

Since inequality between a tiny minority of extremely rich people and the rest of the population is constantly increasing—as Joseph Stiglitz, Nobel-Prize-winning economist and others have pointed out and studied—would basic income be a good idea? If basic income has supporters on both the right and left, are they advocating the same thing?

Then there is the most frequently repeated objection, also in the form of a question. Can basic income be financed? In fact, it would be more precise to say that it was “most frequently repeated until recently”. Although there are not many studies which demonstrate in detail and with technical competence how basic income can be financed, those that have been published are compelling. Whatever they might have in common, each region and each country is different in economic terms, but financing a basic income would have to take the form of changes in budgetary priorities and reforming tax systems. For example, there are proposals advocating the introduction of special mechanisms for taxing financial transactions.

These reforms would bring about a substantial reduction in inequality of income distribution and allow for simpler, more coherent tax and welfare benefits systems. Basic income is not a panacea or a quick-fix for all the world’s social and economic problems but, in view of many who study and espouse it, this measure would mean that people would be better equipped to participate in productive activities, social inclusion would improve, communities would be stronger, political and social participation would be revitalised, and there would be a significant reduction of poverty and all the problems that go with it.

Basic income is not a political economy, per se, but would be part of one, as well as a general project aiming to guarantee and underpin the material existence of the whole population. It might also be seen as a kind of indemnity for past and present wrongs since it requires more privileged citizens to contribute towards achieving the right of existence for everyone. And herein lies one of the main political obstacles for basic income.

This is also the point which makes it possible to explain the apparent paradox of left and right support for basic income. The book notes that the difference depends on financing. The left focuses on additional taxes on the rich, while the right wants to trim down existing welfare to pay for basic income.

“In other words, the left-wing position does not entail any cuts to existing social services or social rights, in education, health, support for dependents, housing, etc., all of which are essential in any welfare state worthy of the name.”

Leave a comment book, book review, spain
The views expressed in this Op-Ed piece are solely those of the author and do not necessarily represent the view of Basic Income News or BIEN. BIEN and Basic Income News do not endorse any particular policy, but Basic Income News welcomes discussion from all points of view in its Op-Ed section.