Rutger Bregman’s TED Talk, a Basic Income lecture with over one million views 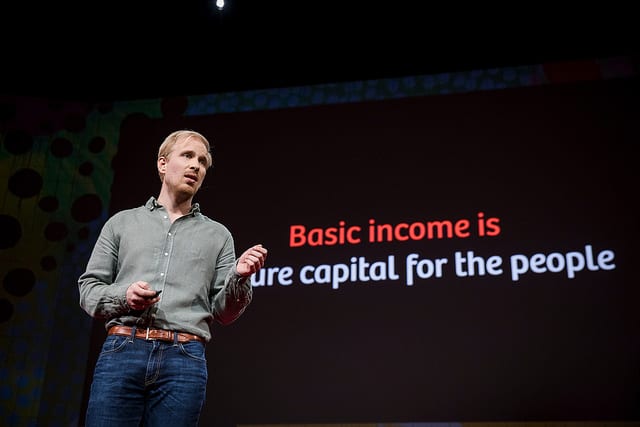 Dutch journalist Rutger Bregman, whose bestselling book Utopia for Realists was influential in generating interest and support in basic income in The Netherlands, spoke on basic income at TED2017, held April 24-28 in Vancouver, British Columbia, Canada.

The overall theme of this official TED conference was “The Future You,” including talks by scientists and engineers on artificial intelligence and robotics. Bregman was among the speakers selected to discuss a “human response” to such technological developments.

Despite the conference’s focus on AI and automation, Bregman does not frame basic income as a response to technological unemployment. Instead, his starting point is to challenge the idea that poor people are poor because they are lazy, irresolute, or inexperienced in handling money. As reflected in the title of his talk, Bregman argues that poverty doesn’t result from a lack of character but simply from a lack of cash–and that, correspondingly, the best way to end poverty is just to give money to the poor. To bolster this claim, Bregman outlines the findings of Canada’s Mincome experiment, a four-year experiment of guaranteed annual income conducted in Manitoba in the 1970s. Bregman further argues that basic income would liberate not only the poor but also the many other individuals who, in the current economy, are forced to work long hours in unnecessary and unfulfilling jobs.

The talk met enthusiastic response from the audience, who applauded at lines such as Bregman’s remark that the government should do away with paternalistic bureaucrats overseeing welfare programs and just give their salaries to the poor people they’re supposed to help. Bregman wrapped up to a standing ovation.

The video of “Poverty isn’t a lack of character; it’s a lack of cash” was later uploaded to the TED website–where it had surpassed one million views by early July.

Watch the Complete Talk Below: