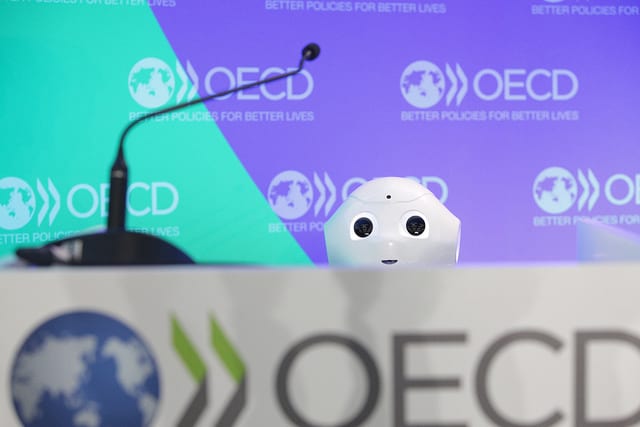 The Organisation for Economic Co-operation and Development (OECD) released a policy brief on the costs of basic income schemes, its first on the topic, in May 2017.

The report, available for download from OECD’s website (“Basic Income as a Policy Option: Can it add up?”), has been published as part of a series on the Future of Work, which was launched in January 2016 following a policy forum in which over 300 participants convened in Paris to discuss and debate the impact of digitization upon jobs and the labor market. Previous publications in the OECD’s Future of Work series have dealt with such topics as automation, technological unemployment, job insecurity, and inequality; however, “Basic Income as a Policy Option” is the first to engage directly and specifically with the idea of basic income.

The policy report considers the cost of a universal basic income paid to all individuals below their country’s normal retirement age, looking in detail at the financial implications of such a policy in Finland, France, Italy, and the United Kingdom. The benefit as conceived would be taxable and take the place of most existing cash benefits and allowances, but it would not replace public services, such as health and education, or benefits related to special needs.

Using a simulation analysis (based on the EUROMOD), the authors conclude that a basic income financed at the level of current  spending would fall far below the poverty line. Correspondingly, a basic income adequate to reduce poverty would require substantial increases in taxation. Even in the latter case, moreover, the policy might not significantly reduce poverty and might leave many worse off as compared to existing programs of social welfare.

In addition to the simulation analysis of the costs of basic income, the authors discuss, in general terms, other potential risks and drawbacks of the policy, and suggest alternative forms of social assistance such as more targeted policies and a participation income.

In a recent post in his Basic Income News blog The Independentarian, BIEN Vice-Chair Karl Widerquist cites the new OECD report as an example of a mistake that he believes to be common in the calculation of the (alleged) costs of basic income schemes: confusing the gross cost with the net cost.

OECD (May 2017) “Basic Income as a Policy Option: Can it add up?”, Policy Brief on the Future of Work, OECD Publishing, Paris.