OPINION: Some Thoughts on May Day 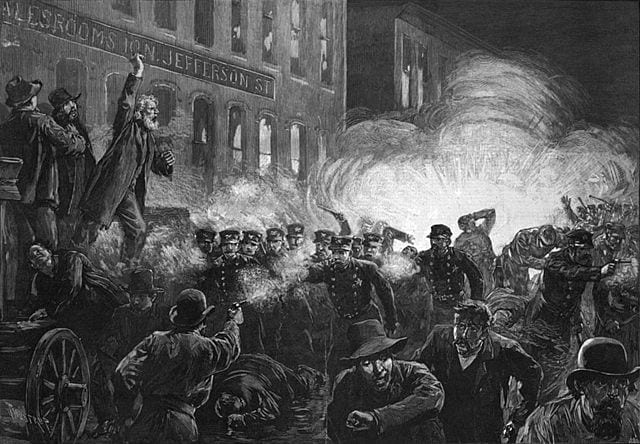 I have some ambivalence about the attempt to rebrand May Day as “Basic Income Day”. I have some ambivalence also, however, about the “modernization” of May Day as a time to demand higher wages for workers but give no attention to another historically important demand: the demand for reduced working hours. It was the latter, after all, that was at issue in the fateful demonstrations at Haymarket Square in May 1886.

That specific demand, of course, was the eight-hour workday. Over 130 years ago, it was widely accepted that society would not cease to function if workers clocked only eight hours per day. In light of such astronomical increases in productivity over the past 130 years, why, pray tell, is the eight-hour workday still considered standard? Why have demands for reduced work hours been all but absent from the US labor movement for over 80 years? Why has technological advancement not translated to increased leisure? Where is the 15-hour week prophesied by John Maynard Keynes? Where is this “fight for 15” campaign? It seems that a 40-hour work week has become all we can envision; we have lost our imagination.

I used to support a renewal of the demand for reduced work hours–and I still do. But I now recognize that it is insufficient, and insufficiently radical. Given the increasing prevalence of alternative job structures–short-term contract work, freelancing, self-employment–a mandatory reduction in work hours would have little or no effect on a large portion of the economy. And precarious employment, I believe, is something that we should not merely accept as inevitable but indeed welcome and embrace. Although not everyone’s cup of tea, perhaps, the freedom, flexibility, and variety is ideal for many of us–and might well be ideal for many more, if only they had a safety net sufficient to eliminate the constant financial anxiety that too often accompanies the lifestyle.

Rather than merely spending less time in traditional jobs (if they happen to be traditionally employed), individuals could–and should–have the option and opportunity to piece together a livelihood out of part-time and short-term work. Doing so with equanimity, however, requires the reliable financial floor that a basic income could provide. Moreover, a basic income could be considered a subsidy that effectively allows individuals to reduce work hours on their own terms.

Of course, a reduction in work hours is still desirable–and perhaps necessary–for traditional full-time jobs which, after all, still predominate in our society (and this might be joined to other reforms, such as legislation mandating that employers allow job-sharing or permit employees to trade income for time). However, with the rise of the “gig” or “1099” economy, an increasing number of individuals find their time not evenly and consistently distributed between work hours and non-work hours but, instead, erratically and inconsistently divided between times of employment (sometimes at multiple “gigs” at once) and times of underemployment or unemployment. For those of us in precariat, the most suitable analogue to work-hour reduction is the provision of an economic safety net that is not contingent on employment, such as a stakeholder grant or basic income, allowing us to seek fewer part-time jobs or short-term contracts.

In the end, then, insofar as May Day recognizes and commemorates not only the demonstrators at Haymarket Square but also the validity of their demand, it might just be that advocating a basic income is the best way to honor the spirit of the day.