All posts from my blog, the Indepentarian
My books and research articles

Indepentarianism is the political ideology associated with the political theory called “Justice as the Pursuit of Accord” (JPA). I (Karl Widerquist) defined JPA and outlined its theory of freedom in my 2013 book, Independence, Propertyless, and Basic Income: A Theory of Freedom as the Power to Say No. It argues that the promotion of freedom in a society with private property requires, among other things, an unconditional basic income in part, on grounds that it is wrong to put conditions on anyone else’s access to the resources they need to survive. A worker needs the power to say no—not just to any one job, but to all jobs—to enter the market place as a free person and not as a forced laborer. Although this theory is drawn from principles stressing freedom in the most negative sense of the term, it is not associated with theories that use freedom to justify economic inequality. It is committed to the idea that economic and politically disadvantaged people in every society are the least free and that the promotion of freedom in the most meaningful sense requires far greater equality of income, wealth, and political power; greater respect for political dissenters, better stewardship of the environment, and other policies. I am planning to layout the JPA theory of property rights more fully in a future book entitled, Justice as the Pursuit of Accord. 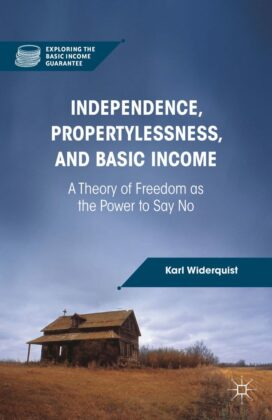 The name, “Justice as the Pursuit of Accord,” comes from the belief that most prevailing theories of justice in political philosophy today are utopian in the sense that they ignore the problem of reasonable disagreement about the basic principles of justice. Social contract theory imagines all the reasonable, rational people in the world agreeing to a hypothetical social contract outlining what justice is. Anyone who doesn’t agree in practice can be dismissed as irrational or unreasonable. Natural rights theorists do not believe that justice comes from any hypothetical agreement. It is just whether anyone agrees or not, but they believe that any rational, reasonable person can discover the true principles of justice by observation and contemplation and anyone who doesn’t agree can be dismissed is irrational or unreasonable. Even the best philosophers are not good at recognizing the difference between reasonable and unreasonable dissent.

These utopian aspects of the leading theories have produced dystopian consequences. Philosophers have misled people into the belief that everyone shares in the benefits of modern society. No matter how disadvantage a person maybe, we are told to believe that they are better off because the government and the property rights system exist. The truth, as Grant S. McCall and I argue in our 2017 book, Prehistoric Myths in Modern Political Philosophy, is that our institutions harm people. Many disadvantaged people are probably worse off than their ancestors were 20,000 years ago.

JPA makes no statement whether there might be a theory of justice to which all rational, reasonable people should or would agree, but it is based on the belief that we are far from the point of discovering such a theory. A true accord exists only if all people are fully autonomous and all literally agree to the social contract or some other basic structure such as a set of natural rights. The essential political problem in the world today is severe disagreement between reasonable people about the most basic principles of justice. We must always pursue that accord, but we should be aware we are unlikely to reach it. Therefore, whoever makes the rules always forces them onto reasonable dissenters. The ruling coalition’s right to make the rules stems both from the agreement of the majority and from their effort to create the minimum negative interference with dissenters. This constraint, of course, requires the governments of the world to treat the disadvantaged and disaffected people of the world much better than they do now—including a payment by those who are most advantage under the existing structure to compensate those who are most disadvantaged under it.

The name, “indepentarianism,” stresses the central role that freedom as independence plays in JPA. The book, Independence, Propertyless, and Basic Income: A Theory of Freedom as the Power to Say No, argues that an individual’s status as a free person is best understood as “Effective Control Self-Ownership” (ECSO freedom, pronounced “exo-freedom” as in external-freedom). In essence: status freedom is the power to say no. An independent person is free from all direct and indirect force to actively serve the interests of others. You can tell a person: go do what you want over there, but if you make it impossible for them to do live as they want without serving some other group of people, you have taken away their status as a free person.

In this sense, most working people in the world are not fully free. If they had direct access to resources, they could hunt, gather, fish, farm, invest, or start a business or start some manufacturing venture by themselves or with whoever wanted to work with them. Instead, the rules of property create “propertylessness,” which in turn indirectly forces the vast majority of people to ask for a job from someone who controls enough resources to give them one. That is, it forces one group of people into become a subordinate of at least one member of another group of people—because we have robbed them of the power to say no to whatever jobs are on offer.

One of the main reasons I defined indepentarianism as a new ideology is the lack of attention that most of the prevailing political ideologies pay to the injustice of indirectly forced subordination.

The book argues that Universal Basic Income (UBI) is the best way to support ECSO freedom in the modern economy. But UBI support is not synonymous with indepentarianism. Someone could conceivably support indepentarian principles without believing they are best upheld by UBI or a similar policy. Although I hope all UBI supporters will have some interest in indepentarianism, I expect that most of them are not indepentarians. For example, one of the architects of the UBI movement, Philippe Van Parijs, argues for UBI on the theory of justice and/or the ideology he calls “Real Libertarianism,” which is based on very different principles than JPA.

JPA also differs from other political theories in its treatment of property rights in external assets: that is, assets external to the human body including natural resources and the things humans make out of them. Egalitarians tend to assume external assets are naturally collective property. Left-libertarians tend to assume that external assets should naturally owned individually in equal shares. So-called “libertarians” tend to assume external assets are natural unowned, but ownable by the first person to “appropriate” them by some procedure that tends to lead to highly unequal ownership. JPA assumes resources are “naturally” unowned and unownable. The only way to create a truly justice property rights system would be through a property rights accord, which is probably impossible. In the absence of that accord, the ruling coalition is always forcing a system of property onto reasonable dissenters. Therefore, they have to minimize the negative interference that their system of rights imposes on dissenters and future generations. This, responsibility, I argue motivates both a strongly egalitarian and environmentalist property rights system.

I plan to layout JPA property theory more fully in a future book, entitled, Justice as the Pursuit of Accord. It will argue that this responsibility for an egalitarian property rights system requires a UBI high enough not only to maintain ECSO freedom but a UBI set at the highest sustainable level. However, I suspect that not everyone who agrees with the basic principles of indepentarianism will agree with this part of the argument.

I’m very interested in what people think—for and against indepentarianism. I’m especially interested to know whether there are other indepentarians out there. You don’t have to agree with all I’ve said here to call yourself an indepentarian. If you’re in agreement with enough of it to use the term, please say so in a comment. If you’d like to know more about it, please contact me at karl@widerquist.com. I am not interested in creating an echo chamber. I’m interested in respectful dialogue with people taking these ideas in their own directions. I’m also greatly interested in people who criticize any aspect of valetudinarianism.

All posts from my blog, the Indepentarian
My books and research articles