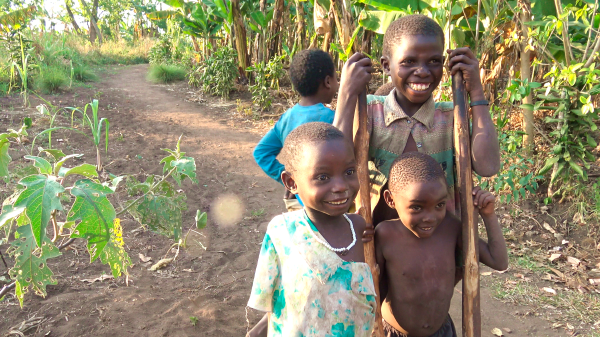 People often ask whether a country has to reach a certain stage of development before a basic income can become viable. A new documentary series will help answer that question.
Village One is a new series that follows a village in Uganda, Busibi, where each villager is receiving an unconditional basic income of around $18.25 USD per month for adults and $9.13 USD for children. There are 56 adults and 88 children who are receiving the basic income in the village for at least two years.
Steven Janssens, the director of Village One and the founder of Eight, discussed this project with the UBI Podcast. The series can be viewed now and will have a new episode premier each Saturday.
Eight is partnering with Ghent University to conduct research on the effects of the basic income on the village. The project has only been running since January, and Janssens said he already has seen dramatic results.
“Every child is going to school in that village now, whereas before it was around 50 percent,” he said.
The positive results on education were not just for children. One 18 year old was able to go back to school after he started receiving the basic income, Janssens said.
So far, Janssens said they have seen an improvement in health care access, increased entrepreneurship, and democratic organization, even though it has only been around three months since the basic income was started.
According to Janssens, villagers have created “saving circles” where they pool together their funds so that they can invest in larger expenditures, even for the benefit of the entire village.
“They are more social with each other. They talk more, they get involved more. They also make plans to make the water distribution better, to make the roads better,” Janssens said. “They are really talking a lot with each other to make improvements for the whole village, not only the individual.”
As for negative effects, Janssens said he has not yet seen anyone change their behavior for the worse because of the basic income, including harming the environment or spending it on “temptation goods,” such as alcohol.
“People who were already boozing before, continue to (do so), but they don’t (consume) booze more or less. People don’t start boozing or using alcohol. There is no change in that type of consumption,” he said.
GiveDirectly, which is also running a basic income program in Africa, has run into some issues with individuals skeptical of the organization refusing the basic income. Janssens said they have also had some similar instances in their case.
“There is one family that refused our project because they believe that we are going to take over the land, or they don’t believe the money is really for free,” Janssens said.
For Janssens, he said he hopes that his project can help people see the effects of basic income for themselves.
“We see a lot of inequality and it is so unfair. In all of my travels I see the same. You see so many people with so much potential, so many talents and they are actually in a lot of cases just wasted. A basic income is one of the instruments that can improve it,” Janssens said.