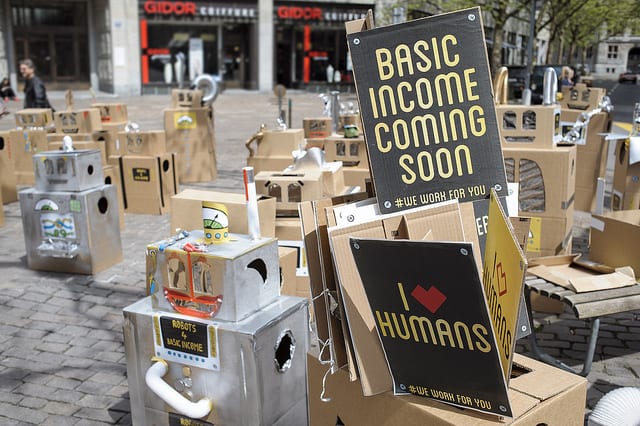 I occasionally hear it asserted that increased familiarity with basic income tends to increase individuals’ support for the idea: as people learn more about basic income, they become more likely to endorse the idea. It is important to clarify the apparent source of this claim and why, given this, it is actually baseless.

(Note that, while there might be many problems associated with measuring both awareness of and support for basic income, I will assume for the sake of argument that the claim is sensible, and focus on the specific misinterpretation of data that, based on my observations, seems to have given rise to this claim.)

As far as I’ve been able to deduce through my following of the discussion of basic income, the claim originated through a misinterpretation of the results of a survey conducted by Dalia Research in March 2016. The survey was a milestone in public opinion research on basic income: the first EU-wide opinion poll on basic income, featuring a representative sample of 10,000 Europeans across 28 countries. Its scope, as well as its encouraging results (64% of respondents said that they would vote for a basic income referendum in their country), led to its wide dissemination within the basic income community. These results go to show how important it is to conduct public surveys as businesses, and the general public can obtain better insight into everyday needs. To help with creating surveys at various levels, a template like one that can be found at https://www.qualtrics.com/marketplace/survey-template/ can serve as a good base to start at. Knowing how people truly feel is an important step for the public.

In a summary of survey results, researchers reported the additional finding that “Europeans who said they were aware of basic income were also more likely to report that they would vote for it.” This claim, as stated, is accurate. However, it tends to implicate an additional claim that is not substantiated by the survey: the causal claim that awareness of basic income increases support for it.

It’s important here to understand the design of the survey in a bit more detail. In the first question, subjects were asked, “How familiar are you with the concept known as ‘basic income’?” (without no definition of ‘basic income’ provided). 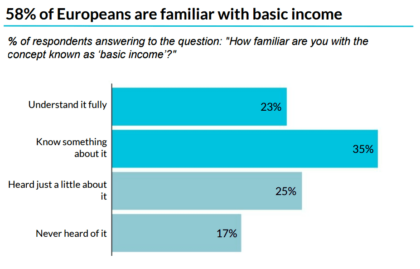 Following this preliminary question, the interviewers provided the definition of that was to be assumed during the remainder of the survey: “A basic income is an income unconditionally paid by the government to every individual regardless of whether they work and irrespective of any other sources of income. It replaces other social security payments and is high enough to cover all basic needs (food, housing etc.).”

Subjects were then posed the question “If there would be a referendum on introducing basic income today, how would you vote?” (“for it,” “against it,” or “not vote”).

As part of their analysis, Dalia Research broke down the responses to the latter question by level of awareness as measured in the first question: “More aware” (corresponding to responses of “Understand it fully” and “Know something about it” on the first question) versus “Less aware” (corresponding to “Heard just a little about it” and “Never heard of it”). 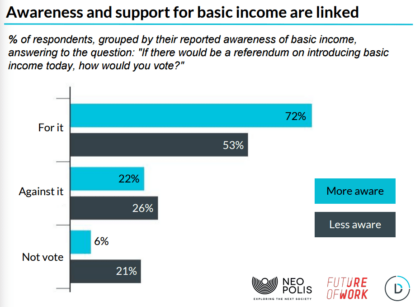 As seen in the chart above, those who claimed to be relatively “in the know” about basic income were disproportionately likely to express willingness to vote in favor of the hypothetical referendum. This, it seems, was the main empirical support behind the claim that “awareness and support for basic income are linked,” as Delia Research cautiously phrased it. (We might also note that those with greater awareness were also disproportionately likely to express willingness to vote rather than to abstain. That is, awareness is associated not only with support but also with decisiveness.)

To cite the well-known Statistics 101 maxim, however, correlation does not imply causation. The finding that awareness and support for basic income are “linked” does not entail that higher awareness is the cause of support. In the present case, in fact, it’s easy to imagine a causal relationship in the opposite direction: plausibly, those who find the idea of basic income appealing are more motivated to research and learn more about it. (Indeed, this probably describes many of us who follow Basic Income News.) Moreover, to give another potential explanation, those who are generally interested in and supportive of progressive policy might be relatively likely to read publications that discuss basic income–and thus to learn about the concept–as well as being relatively likely to vote in favor of such a policy.

Whatever the underlying cause of the observed statistical relationship, one cannot cite the Dalia Research survey to support the assertion that awareness of basic income increases support. The survey simply did not test this causal claim, and thus provides no data on it.

Does Support Increase with Awareness?

How might one test the causal claim? One possibility might be to select individuals who initially report no knowledge of basic income, provide a short description of the policy, conduct a “pre-test” of their attitudes, provide more information about the proposal, reassess their attitudes toward the idea, and so on–making the imparting of information about basic income an experimental intervention. To my awareness, no such study has been conducted (although a 2016 survey of San Francisco voters, discussed below, comes close).

Given what we do know, however, it is unreasonable to infer that increased familiarity with basic income is sufficient–or even reliable–to generate increased support.

First, let’s consider the “real world” case study of the Swiss referendum. On June 5, 2016, citizens of Switzerland voted on a referendum that would have introduced an article in the federal constitution mandating a government-funded “basic income” sufficient to “allow the people to live in a dignified manner and participate in public life.” The referendum was defeated, with 23% of voters in favor. This final result suggests, if anything, a decline in popular support–compared, for example, to an April 2016 survey that indicated that 40% of Swiss voters were inclined to vote “yes” on the referendum–despite the fact that the basic income referendum continued be heavily publicized and debated between April and June (leading, presumably, to increased awareness).

Secondly, we might turn to “Oxford-style” debates on basic income, in which audience members are polled on their support for the issue before the debate begins and again after it has concluded. Presumably, nearly all audience members would claim that their familiarity with the issue being debated increases during the course of the debate. Minimally, then, such debate settings show that greater familiarity with basic income does not invariably lead to increased support, given that basic income proponents have “lost” Oxford-style debates such as ABC’s Intelligence Squared Debate (March 2017) and Ontario’s Wolf Hall Debate (April 2016), with even some initial supporters apparently changing their positions during the course of the debate. (Of course, the results can hardly be generalized: much depends on the quality of the particular debaters, and debate audiences are by no means representative of the general population.)

Finally, let’s look at a survey of 500 likely San Francisco voters conducted in April 2016. In contrast to most opinion polls on basic income, the San Francisco survey did attempt to discern the impact of increased understanding of basic income (initially called ‘base income’ in the survey) on support for the idea. At the start of the survey, subjects were asked “Do you support or oppose providing every resident of the United States with a base income?” No further elaboration on the concept of a “base income” was provided.

After respondents answered this initial question, the researchers provided more details about the proposed policy (which was relabeled as ‘universal basic income’) and polled respondents on their support or opposition to each individual policy detail: the payment “is not tied to work or having a job”; “the amount of the monthly check would be between $500 and $2000”; the “monthly income could be used for anything”; “the cost of the monthly income would be paid for by tax revenue”; “every adult resident would receive a monthly check.”

Finally, following the provision of these five policy specifics, respondents were against asked about their support for basic income. This post-assessment showed a decrease in support and increase in opposition (with fewer respondents remaining undecided). As Misha Chellam interpreted the result in a blog post, “digging into the details led to concerns and eroded the policy support.” 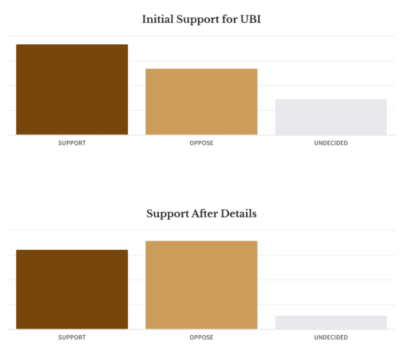 This is not, precisely, a test of the effect of increased awareness on support for basic income. For one, the terminology was alerted, with the usual term ‘base income’ used in the initial question. Additionally, we cannot be certain that the survey questions had the effect of imparting new information to respondents: in some cases, the additional questions might merely have had the effect of raising the salience of previously known information, which happens to cast a less favorable hue on the idea of implementing basic income. By way of example, surveys conducted in recent years in Finland and Canada indicate that support for basic income decreases when respondents are requested to entertain the idea of funding it through tax increases. In these cases, plausibly, it’s not that respondents did not previously believe that at least part of the funding for a basic income would come from tax dollars; it could simply be that this consideration was not salient when they were first asked, in the abstract, whether they favored the idea of a basic income.

We might note here, however, that 51% of respondents the San Francisco poll claimed to know “nothing” about universal basic income prior to the survey. Thus, it is quite likely that, for a majority of respondents, the questions on policy specifics did have the effect of introducing more information (not merely, that is, increasing the salience of old information or existing beliefs). In this light, the San Francisco survey not only fails to confirm the claim that greater awareness leads to greater support, but also supports the opposing claim that greater familiarity with the idea of a basic income tends to lead to a decrease in support (at least in the population studied).

Overall, we still know very little about the effect of awareness on support for basic income. To my knowledge, however, there is no sound empirical basis for the claim that awareness increases support–outside, perhaps, of anecdotes and hearsay.