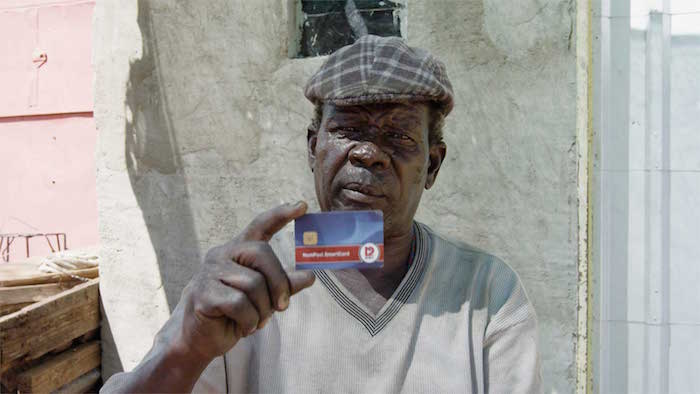 A new documentary on basic income — Free Lunch Society by Austrian director Christian Tod — premiered in Copenhagen’s Bremen Theatre on March 20, 2017, to a crowd numbering in the hundreds.

In an interview about the film (“Curiosity and the desire to improve the world”), Tod explains, “The film takes as its point of departure an ethical justification of basic income founded on the premise that natural resources belong to us all.” Tod’s musical selection — centered around the song “This Land is Your Land” — reflects this orientation toward the subject, as do his cinematographic decisions to include clips of natural scenery interspersed between the vintage footage and talking expert heads. (As he says in the same interview, “What might not come across quite so clearly in the completed film are elements which strike me as extremely important such as the countryside, the Earth, natural resources. I had wanted these aspects to be more prominent, but then the narrative would have suffered.”)

Tod has also acknowledged the influence of the science fiction series Star Trek: The Next Generation on his thinking about basic income and, eventually, the film: “It presents a society where there’s no money, where people only work because they really want to, and where they are driven by human curiosity.” Correspondingly, Free Lunch Society begins and ends with scenes from Star Trek.

About the interview subjects in his film, who were chosen in part to emphasize the political diversity behind support for basic income, Tod notes, “It’s interesting that they are almost all business people: owners of technology companies, CEOs of large or small companies, people who can afford to think about making the world a better place.”

Asked about the most surprising thing he learned while making the film — in an interview following the film’s premiere (see below) — Tod mentioned the discovery that “basic income was such a big thing in the United States in the 1960s,” tested in experiments and nearly voted upon.

Most of Copenhagen’s Bremen Theatre 648 were filled at the world premiere of Free Lunch Society on Monday, March 20, 2017.

Director Tod states, “It was a fabulous evening in a tremendous location. It was very special to have the world premiere of Free Lunch Society in Copenhagen, because my film career started in this beautiful city 10 years ago, when I studied at Copenhagen university’s film department. The premiere on Monday was, so far, the peak of my career in filmmaking. Almost 650 people watching my vision and applauding, laughing and apparently liking it, is hard to top.”

The film’s world premiere was followed by short interviews with Tod and Bohmeyer, as well as a panel discussion with Uffe Elbæk (Leader of the Danish green political party The Alternative; Danish: Alternativet), Steen Jakobsen (Chief Economist at Saxo Bank), and Dorte Kolding (Chair of BIEN-Danmark). All three panelists were sympathetic to the idea basic income, although Elbæk explained that The Alternative was not prepared to endorse it — though they would be willing to pursue pilot studies, and though the party’s political agenda includes the provision of benefits to the poor “without specific control measures” (that is, without conditionalities like work requirements, similar in spirit to a basic income). Jakobsen advocates a negative income tax, as proposed by Milton Friedman, as a way to increase the purchasing power of the lower and middle classes and produce a more equitable distribution of wealth.  Watch below (panel discussion and debate in Danish).

The world premiere was followed by several other showings in Copenhagen, including one which was held as part of BIEN-Danmark’s Annual Meeting (March 25, 2017), with showings in Austria scheduled in late March and early April.

Thanks to Karsten Lieberkind for helpful information and reviewing a draft of this article.