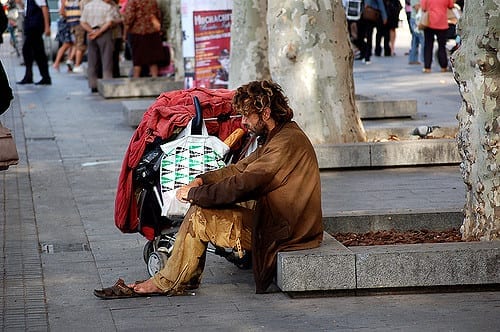 The city of Barcelona is preparing to test an income maintenance program in one of its poorest districts. While it has been called a ‘basic income’, the tested programs diverge in several ways from BIEN’s definition of the term.

Urban Innovative Actions (UIA), an initiative of the European Commission that supports projects investigating “innovative and creative solutions” in urban areas, has allocated €4.85 million (about $5.15 million) to fund a three-year pilot study of guaranteed minimum income (GMI) in Barcelona, Spain. The project is dubbed “B-Mincome” in reference to Mincome, a well-known study of GMI conducted in the late 1970s in Manitoba, Canada.

In the B-Mincome experiment, 1,000 randomly selected households in the Besos district — one of Barcelona’s most economically disadvantaged areas — will receive cash subsidies of an amount sufficient to ensure that their earnings exceed the poverty line. At the time of this writing, the City Council of Barcelona is still finalizing the design of the study. However, the city plans to test several types of GMI schemes, and it plans to investigate them in conjunction with improvements in public services.

According to Project Manager Fernando Barreiro, the objective of B-Mincome is to “test and analyse how effective forms of universal economic support, combined with access to services such as housing, education, work and community participation can reduce poverty.” Results from the pilot will be used in a comparative analysis of the cost and effectiveness of different anti-poverty policies, “with the ultimate goal of developing more efficient welfare services.”

While the B-Mincome pilot bears some similarity to a universal basic income (UBI), and has been called by this name, it should be noted that the program to be tested is neither universal nor individual. Moreover, some of the GMI schemes to be tested may not be unconditional.

First, the B-Mincome program will provide a cash supplement to boost low incomes rather than a uniform and universal cash grant (as was also the case in the Manitoba’s Mincome experiment). These supplements will guarantee that no participant in the study has a household income below poverty level. However, as typical of GMI schemes, the amount of the supplement will be reduced if a household’s income increases during the course of the experiment.

Moreover, the design of the study will promote the targeting of the most disadvantaged recipients. Researchers will employ a randomized block design to ensure the representation of various types of households that tend to suffer the most poverty (e.g. immigrants, single-parent families, the long-term unemployed, and unemployed youth).

Second, as already implied, the payments will be to households rather than individuals.

Finally, some of the variations to be examined are likely to impose conditions of the receipt of the benefit. Barreiro has related, for example, that the city is considering testing a GMI program that makes benefits conditional searching for a job, participating in a training program, or doing work for the community. Such a program would be analyzed for its efficiency and effectiveness against a GMI lacking these conditions.

To develop B-Mincome, the Barcelona City Council has partnered with four research organizations and institutions: the Young Foundation, the Institute of Governance and Public Policy (IGOP) at the Autonomous University of Barcelona, the Polytechnic University of Catalonia, and the Catalan Institution for Evaluation of Public Policies (IVALUA). The city is also consulting with contacts within the governments of Finland, the Canadian province of Ontario, and the Dutch municipality of Utrecht, which are currently running or about to run their own similar pilot studies.

Note: A previous version of this article incorrectly listed IESE as one of the City of Barcelona’s partners in the pilot. It has been corrected to IVALUA. (Edited March 2, 2017.)