FILM REVIEW: ‘In the Same Boat’ 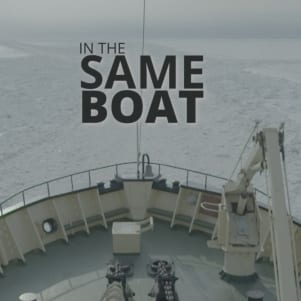 On January 9th, Zygmund Bauman passed away at the age of 91. He is considered one of the great philosophers and sociologist of our time, who introduced the concept of “liquid modernity” to describe the postmodern age.

He is the main character in the recently released documentary “In the Same Boat” where he urges to tackle global problems on a global scale, and suggests exploring new roads such as a universal basic income.

Read more in this review: “Man vs machine, or man ahead with machine?”

MACHINE VS MAN, OR MAN AHEAD WITH MACHINE?

In the modern era, digital technology is substituting human brain power in a similar way as the steam engine did in the eighteenth century, making muscle power inefficient. Would it be possible, however, to harness this digital revolution for the benefit of humans and the planet, to share prosperity? The documentary “In the Same Boat,” which is being released in several countries throughout Europe, has opened up this interesting debate.

We are in the middle of a new industrial revolution and with the advance of Artificial Intelligence, this process is affecting an increasing number of sectors in the economy. Not only is traditional blue-collar work being carried out by machines, but also work that requires specifically human capabilities. In the coming years, for instance, the self-driving car will turn the transportation sector on its head.

This revolution in productivity can be seen as good news, since machines will do our traditional work and we can dedicate our time to education, care, hobbies and services. Also, new technologies and the availability of huge amounts of data allow us to optimise the planet’s scarce resources. However, there is no guarantee that the increase of wealth will be spread over the inhabitants of the planet with any criterion of equity. There is a real risk that the ownership of machines will be reduced to a small number of people and that the great majority of the world’s population will be left without the means to generate an income.

Most countries in the world have seen income inequality rise during the last decade, in part because of the technological revolution. Economic data (Link 1) show that since the year 2000, the western economy has invested more in technology and less in human capital. This strategy has endowed innovative entrepreneurs with more benefits, without creating more jobs or raising average incomes. The generated wealth went to a tiny minority. Wealth accumulation can come if you already have financial capital and know how to invest it, but if you depend on selling your skills in the labour market, it becomes more difficult to make a living.

When looking at the data of the concentration of wealth, there isn’t much margin for many interpretations. There are 62 people in the world that are as wealthy as the poorest half of the global population. In the US, the middle class is endangered; in the period of economic recovery between 2009 and 2013, the top one per cent of the population was assigned 25 times more of the national revenue than the rest (Link 2).

Many people feel that they are being excluded from the labour market, and they are aware that they have little chance to win the race against the machines. The solution is to learn to work ahead with technology and to think about a strategy to create wealth together, says Erik Brynjolfsson, an expert in information economy (Link 3).

“We are in full transformation towards the society of the 21th century, and the outcome is still open: either with shared prosperity, or, at the contrary, with more inequality. This decision depends on our individual choices and on our strategy as a society. The power is in our hands. Technology is merely an instrument,” Brynjolfsson said.

RECONCILIATION OF POWER AND POLITICS

Image still from ‘In the Same Boat’

The dominant political debate today doesn’t pay much attention to the digital revolution we are experiencing, and mainly focuses on creating favourable conditions to stimulate companies to create as many jobs as possible.

This way of thinking conforms to the paradigm of the second half of the 20th century, when we got used to the idea of ‘full employment’, explains sociologist Zygmund Bauman (Link 4). In our social consciousness, the normal situation is to be in employment and a person that is ‘un-employed’ does not fit this normality. However, in the new technological world, the techniques of the past don’t seem to work, and a solution for the structural problem of unemployment hasn’t yet been found. In Europe, 8.5 per cent of the active population has no job, with significant regional and age variation (Link 5). The situation in Greece and Spain is the most alarming.

According to Bauman (Link 6), we don’t know how to regain control over our economic system because it operates on a global scale: “With just one click on a computer, a company can decide to move 100.000 jobs from here to another part of the planet where labour conditions are more interesting,” he asserts, “Capital and finance move without restraints, but labour does not.”

Looking for solutions, citizens turn to the political class who ultimately can’t influence the economic decision-making process. “They have a local sphere of action, mainly at the level of the nation-state, but power is organised on a global scale and escapes from political control. This divorce between power and politics is the essence of the problem of our society in transformation”, says Bauman, who considers it is a task of all citizens to reconcile both (Link 7).

For the first time in human history, all inhabitants of the planet are interconnected and are interdependent. If we want to resist the populist and protectionist wave that is extending over the globe after Brexit and the election of Donald Trump, we must think about different ways to organise work and to distribute wealth. Several experts insist that we should radically rethink the foundations of our society and they propose an open dialogue to come to sensible solutions.

WE ARE ALL IN THE SAME BOAT

The documentary “In the Same Boat” made a momentous effort to open this debate and to project the voices that invoke a new paradigm. Zygmund Bauman, Serge Latouche, Tony Atkinson, Mariana Muzzucato, José Mujica and many others explain why the current labour model has hit a dead end. With a cinematographic style, spectacular photography and a varied musical palette, the film is fresh and inspiring, even whilst dealing with such a weighty subject as the future of humanity.

Zygmund Bauman considers the message of ‘In the Same Boat’ the complete antithesis of Margaret Thatcher’s famous slogan ‘TINA’; claiming that “There Is No Alternative” to the liberalisation of all parts of society as it is the only way to guarantee welfare. On the contrary, the polish sociologist proposes to “change the course of the boat that all inhabitants of the planet are in”. He believes that the new paradigm of the 21st century should cut the ties between income and work. “We should abandon the idea of working to make our living. We cannot condition the right to live to the interests of the company we work for,” he argues (Link 8).

The documentary proposes a universal basic income as one of the solutions to fair wealth redistribution. It is not considered a charity for the misfortunate, but rather a technological dividend of the past — a common right. Mariana Mazzucato (Link 7), an economist specialized in technological innovation, explains that “innovation largely depends on public financing and on a collective effort. Moreover, innovation today is a heritage of discoveries of the past.” In other words, what makes your smartphone smart (battery, GPS, Internet, mathematical algorithms, touch screen, etc.) are no individual or private inventions, but are the result of the effort of society as a whole with publicly-funded research programs. Why is it then that the benefits of this technological heritage go to just a privileged minority? How can it be justified that the cost and the risk of research is burdened by the public, but the rewards are privatised? If technology allows us to delegate work to machines due to the effort of many generations, wouldn’t the legitimate heir be society as a whole?

The film has arrived at the precise moment to put the current economical and institutional crisis into a wider perspective. Hopefully it can help to spark a global debate about the necessary societal changes.

“In the Same Boat” was released in Spain in November 2016 and will be screened in other countries during 2017. Members of the Basic Income Network that want to organise local screenings can contact the team on the Facebook page www.facebook.com/inthesameb.

Included is the trailer of the documentary and the presentation with Zygmund Bauman, talking about the future of work. Barcelona, February 2016.

About the author:
Bart Grugeon Plana works as an investigative journalist for the Barcelona based newspaper La Directa, and collaborates with other news platforms such as Apache.be and Ouishare Magazine. He has a special interest in common-based peer production, collaborative economy, platform cooperativism and energy transition.

Trailer In the Same Boat