Looking Back on 30 Years of BIEN: Stories from Life Members 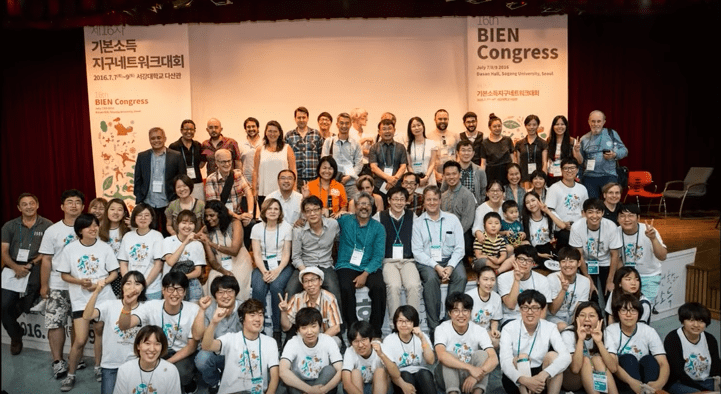 This year, BIEN celebrated the 30th anniversary of its birth. In commemoration of the occasion, founding members reunited at its birthplace–the Université Catholique de Louvain in Louvain-la-Neuve, Beglium–for a series of talks on the past and future of BIEN and the basic income movement.

At the end of the year, all Life Members of BIEN were invited to reflect on their own personal histories with the organization and movement. Read their stories here:

• Hyosang Ahn (Director of Basic Income Korea Network; South Korea): “The first time I encountered the idea of basic income was the summer of 2007. I was at the time the vice president of a small party on the left, rather imaginatively named the ‘Socialist Party’, and was preparing for the coming presidential election…”

• Jan Otto Andersson (Life Member; Finland): “… In 1986 I took part in the international congress on Basic Income in Louvain-la-Neuve. My contribution was called “Basic Income in Three Social Visions”: a Red-Blue mixed society, a Blue-Green dual society and a Red-Green combined society. …”

• Christopher Balfour (Life Member; UK): “… Having been adopted as a Conservative Parliamentary Candidate in the mid-1960s…, I began to talk with already-elected Members of Parliament who shared my concerns. In this way I met Brandon Rhys Williams and then his mother, Dame Juliet. They introduced me to this concept of a small payment as of right, no strings attached, to all citizens. …”

• Richard Caputo (Life Member; US): “… I was not taken in by the idea of an unconditional basic income (UBI) guarantee whole cloth. It did not square well with my sense of social justice, nor with my concerns about poverty reduction, though it did address what I saw as the diminished value of wage-based labor in an increasingly global economy and seemed compatible with the social work value of self-determination. …”

• André Coehlo (News Editor-in-Chief; Portugal): “For me to contribute to BIEN…was kind of a natural progression in my personal activism, after the Zeitgeist Movement. I naturally accepted the basic income concept, after defending a resource based economy, as the former can be seen as an intermediate step towards the latter. …”

• Louise Haagh (Co-Chair of BIEN): “I first came across basic income in summer of 2001 when instructed about it by Workers’ Party Senator Eduardo Suplicy, at his home in São Paulo. I was doing research on workers’ rights, at the same time undertaking a survey of economic security among residents in poor and middle-income district …”

• Michael Howard (Coordinator of USBIG Network; US): “I can remember the moment when I first took a keen interest in basic income. I was familiar with the idea, having spent a research leave at the European University Institute in Fiesole, when Philippe Van Parijs was there writing Real Freedom for All. …”

• Julio Linares (“Life Member 252”; Guatemala): “I first heard about BIEN at a conference in Switzerland about the future of work and basic income. I went to that conference because of a hunch. …”

• José A. Noguera (International Advisory Board of BIEN; Spain): “I still remember quite clearly the first time I read something about the idea of ​​a Basic Income: it was back in 1991, when I was finishing my degree in Sociology in Barcelona, and spent most of my time reading abstruse texts of social theory. …”

• Steven Shafarman (Coordinating Committee of USBIG; US): “My drive to enact a basic income – and most of my ideas about how to attract, educate, organize, and mobilize allies – arose from exploring the way young children learn to walk and talk. …”

• Jenna van Draanen (Outreach Coordinator and News Editor; Canada): “Working with BIEN has been a wonderful experience for me. Not only are there extremely dedicated people here, but they are also talented and kind. …”

• Philippe van Parijs (Co-Founder of BIEN; Belgium): “It is hard for young people today to imagine what it meant to run an international network when all communication between its members had to happen through the post. The newsletter needed to be typed, then printed, then photocopied, then stapled. …”

• Martine Mary Waltho (Life Member; UK): “I first came across the idea of a basic income when I was at university in 1984. There was an article in a magazine; it might have been the New Society. …”

• Toru Yamamori (News Editor; Japan): “My encounter to the idea of a basic income was around 1991-2. I was involved in solidarity activism with a casual worker’s trade union, in which many of the members were homeless construction workers. …”