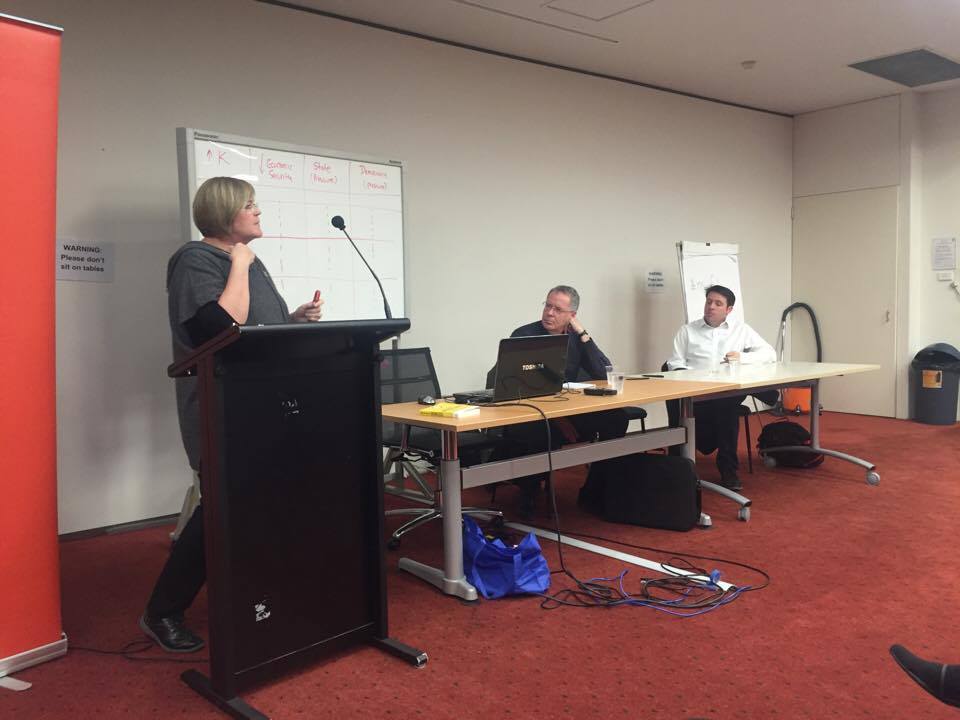 On September 9, the New South Wales Fabians hosted a discussion of universal basic income in Haymarket.

The event featured a lineup of three speakers. First, Ben Spies-Butcher (Department of Sociology at Macquarie University) argued that Australia should pursue a universal basic income as a way to provide individuals with more freedom and control over their own lives and work. Next, Peter Whiteford (Crawford School of Public Policy at Australian National University) outlined the cost of a UBI. Finally, Louise Tarrant (formerly of United Voice) laid out many of the pros and cons of the policy. The three individual speeches were followed by the question and answer session with the audience.

About 80 to 90 people attended the event, which had been widely publicized on social media. Lachlan Drummond, president of the NSW Fabians, states that this crowd was the largest that the group has seen at any of its events over the past three years.

Among the unexpected attendees were two Italian members of the Five Star movement, who video-recorded the entire event:

The NWS Fabians have also released an audio-recording of the event as a podcast.

Drummond explains that several factors prompted the NSW Fabians to organize and host the event. First, the Fabians were interested in opening discussion of UBI simply because it is a “big transformative economic idea” that is already being talked about by the British Labour Party and some think tanks in the UK, as well as by other groups in Europe, Canada, and elsewhere. Second, the group saw a gap in Australian political discussion surrounding UBI:

We’ve seen some far-left and even some right wing groups talking about it here in Australia but none on what we might call the “mainstream centre left”. We wanted to help push that debate along. We know there are people in both the Greens and the ALP [Australian Labor Party] who are keen on the idea, but as yet we hadn’t seen one event where everyone was all brought together to discuss it.

Third, Drummond notes that many members of the Fabians are personally undecided on the issue of UBI–and yet, previously, UBI had never been given a fair hearing at any NSW Fabians event. When previous guest speakers had broached the issue, their comments were negative and dismissive. Notably, at a March event on The Future of Work, Dr. Victor Quirk of the University of Newcastle spoke against UBI in favor of a return to full employment.

Not content with such a swift rejection of UBI, Drummond said that the NSW Fabians “wanted to look at the policy in a systematic way–to go through the positives and negatives, to look at the numbers, and the political realities, and whether pilot studies have shown it to actually work”.

According to Drummond, the main goal of the event was to leave the audience better informed about the issues surrounding UBI–both moral and practical–and that, by this measure, the event was a “big success”:

I think when you see a big progressive idea like this, it can be easy to jump on it and say it’s a great idea without knowing the arguments and practicalities (or even some potential alternatives).

Ben Spies-Butcher was great on the moral arguments, and how it should interact with other parts of the welfare system. Peter Whiteford gave us some useful numbers on how much it would cost and what pilot studies had actually discovered. Louise Tarrant was also very clear headed on the positives and negatives, both practical, economic and political.

We also had great impromptu contributions from Eva Cox on shorter working hours, and Luke Whitington who rebutted the argument about inflation by stating we are currently in a deflationary environment, and by outlining some creative and progressive ways it could be paid for. The audience was really engaged and asked great questions.

Luke Whitington, Deputy Chair of the NSW Labor Party Economic Policy Committee, found it “well-organized” but believes that all three features speakers overlooked one of the most important reasons to support UBI:

None of the speakers talked about deflation, either in relation to the specific term of falling prices, nor in relation to the more general term for a long term low growth period, as exemplified by Japan since the 90s and the world in the 30s, and in milder form, advanced economies since the 70s, compounded and accelerating now with financialisation and automation. That none of the panel speakers raised the necessity of basic income as a counter deflationary mechanism was a pity, especially as Yanis Varoufakis’ speech on the topic has been on YouTube for a number of months. They did, however, inform the audience on a wide range of ethical and economic issues that a BI would affect.

As Drummond pointed out, though, Whitington was eventually able to broach the issue of deflation himself, in response to issues raised by Tarrant. On Whitington’s view, based on his experience as an organizer in the Labor Party, the most politically viable approach to a UBI in Australia is to promote the policy as a counter-deflationary measure and to support its financing through a sovereign wealth fund. This, he notes, was not stressed by the pro-UBI speakers at the NSW Fabians event.

In Australia it would be much more difficult to argue that unemployment benefits be paid without any activity or eligibility tests (which Spies Butcher correctly pointed out would immediately improve the lives of hundreds of thousands of people currently stuck in the welfare ‘safety’ net), than to set up a fund that collected mineral or other revenue and distributed it equally to all citizens as a dividend.

Douglas Maclaine-Cross, who has previously worked with Whitington to promote UBI, also attended the event. Maclaine-Cross was struck by the apparent level of agreement: “Generally nobody seemed to object to the policy [UBI]; on the contrary it seemed that most people were very keen on it”:

[P]eople generally agreed that it could be afforded though it would of course mean raising more revenue. The estimates and suggested amounts involved a more generous payment than I was thinking of, which I took as a positive sign. …

From the floor there was a plea on commercial grounds from a libertarian. There were a few very positive and inspiring comments. I heard the word utopia mentioned a few times. There seemed to be a consensus from the audience that growing inequality was a very real problem and needed to be addressed somehow. So perhaps it was a case of preaching to the choir. However having made the case to people from a broad spectrum of politics myself, there is a chance for bipartisan support; so I have very high hopes for the policy in Australia.