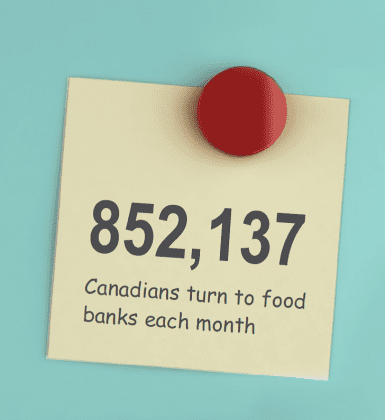 “It has been clear for many years that welfare is a broken system,” the HungerCount 2015 report says. “Benefit levels are unreasonably low, the administrative bureaucracy is extremely difficult to navigate, and stigmatization of those in need is widespread. The system seems beyond repair.”

Just over 850,000 Canadians turn to food banks each month – over a quarter more than before the global financial crisis – and over one-third of current users are children.

Levels of social security support are “plainly inadequate” in a situation where around 70% of households with social assistance are food insecure, Food Banks Canada says citing an earlier study by international research group PROOF.

HungerCount reports have consistently warned that the food bank network is an unofficial safety net that fills the gaps in Canadian provinces’ social assistance programs. Basic income as a policy solution has featured less prominently or not at all in earlier HungerCount reports.

Food Banks Canada,”HungerCount 2015: comprehensive report on hunger and food bank use in Canada and recommendations for change.” www.foodbankscanada.ca, 3 November 2015