The first meeting of a European working group on minimum income was held on October 20, 2015 at the European Parliament. While the event was advertised at the pan-European level with the label “minimum income”, many of its participants are in favor of an unconditional basic income. The discussion developed around the synergies and differences between campaigns for a guaranteed minimum income and universal basic income advocacy.

The meeting was organized by the Confederal Group of the European United Left/Nordic Green Left (GUE/NGL). It was an important opportunity for in-depth discussions between Members of the European Parliament (MEPs), key experts, and various political and activist organizations like Basic Income Network Italy, BIEN’s Italian chapter.

You can listen to the audio of the event (in Italian) here.

The objectives of the first meeting were:

– to hold an initial exchange of views on the state of  minimum income and basic income at the pan-European and individual member states’ level;
– to discuss the possibility of submitting a parliamentary inquiry;
– to discuss a plan of action for 2016.

The original announcement from the website of the Basic Income Network Italy is available here. 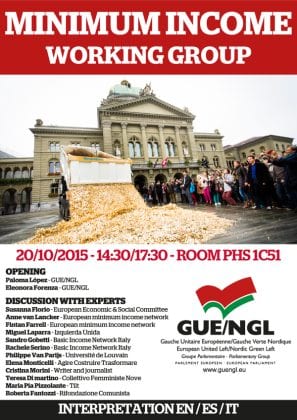