Inequality: What Can Be Done? by Anthony B. Atkinson, a review 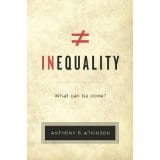 Politicians of all political parties tell us that inequality is a problem and that they are working to reduce it. Now they have the manual that they need: and what we all now have is a book that builds on Tony Atkinson’s lifetime of careful and relevant research, that offers analysis of the definitions and causes of inequality, that proposes policies to deal with the problem, and that shows that the policies proposed are affordable.

The first part of the book discusses the meaning of ‘inequality’, and then studies how inequality has changed during the last hundred years. A particularly important conclusion is that in the immediate postwar decades, the welfare state was ahead in the race to keep up with widening inequality of market incomes, but since the 1980s it has failed to do so – often as a result of explicit policy decisions to cut back on benefits and on coverage. (pp.67-8)

Then the economics of inequality are discussed, and the final conclusion of the first part is that in order to reduce inequality market income inequality needs to be reduced and governments need to achieve more redistribution through tax and benefits systems. The second part of the book makes detailed proposals for policy change: technological innovation to increase worker employability; a better balance of power between the different stakeholders in the economy; guaranteed public sector employment at the minimum wage; a national pay policy (including a living wage); a guaranteed positive real rate of interest on savings; a capital endowment payable at the age of majority; a sovereign wealth fund; a more progressive Income Tax; a broader tax base; an Earned Income Discount; a progressive lifetime capital receipts tax; a progressive or proportional property tax; increased Child Benefit; increased overseas development aid; and either a participation income or a renewal of social insurance. Each of the proposals is persuasively argued.

In the third part of the book, Atkinson tackles three possible objections to his proposals: that they would reduce economic growth; that globalization would make them difficult to implement; and that we wouldn’t be able to afford them. He shows that the welfare state makes a positive contribution to economic performance; that his proposals would have incentive effects in the employment market; that global competition restricts the scope for redistribution rather less than we might think; and that his proposals could be revenue neutral.

Of particular interest to readers of this Newsletter will be the social security proposals. Atkinson is well aware of the problems relating to means-testing, he regrets that so many families in the UK are so dependent on means-tested benefits, and he studies two alternative possibilities: a Participation Income, and a renewed social insurance system. In relation to Child Benefit, he would like to see the end of the tax penalty for households that include higher rate taxpayers; he would like it to be paid at a higher single rate; he would like it to be taxed; and he would like the European Union to take the initiative in establishing an unconditional income for children throughout Europe.

And then comes a further contradiction: The chapter on costings employs the EUROMOD software managed by the Institute for Social and Economic Research at the University of Essex (Professor Holly Sutherland and her colleagues are well thanked in the book’s acknowledgments). The graph on p.297 that shows the effects of a Participation Income on inequality shows no evidence of any ‘participation’ conditions having been taken into account: and it is difficult to see how a programme such as EUROMOD could take into account such social contributions as voluntary work. What appears to have been modeled is a Citizen’s Income.

An alternative to a Citizen’s Income would be a reinvigorated social insurance system, which, as Atkinson recognizes, would need to be adapted to today’s labour market. He takes as his model the new Single Tier State Pension, and suggests that other National Insurance benefits should be higher in value and should achieve greater coverage – for instance, by lasting longer – and that National Insurance Contributions should be credited for periods during which any kind of contribution is being made to society (echoing the eligibility criterion for a Participation Income). The graph showing the effects on inequality of both a Participation Income and a reinvigorated Social Insurance system suggests that the former would redistribute from rich to poor, and the latter more towards middle income households.

We hope that this well researched and clearly written book will be carefully read by anyone with any connection to the making of social policy; that we shall see implemented as many as possible of the policies for which Atkinson has provided such useful evidence and such persuasive arguments; and that the arguments both for and against a Participation Income will contribute to the increasingly vigorous
and informed debate about a Citizen’s Income.

The book contains a useful glossary and a detailed index. The publisher is to be congratulated on publishing a good quality hardback at such a low price. Other academic publishers might like to follow this example.

[This review was first published in the Citizen’s Income Newsletter, 2015, issue 3.]