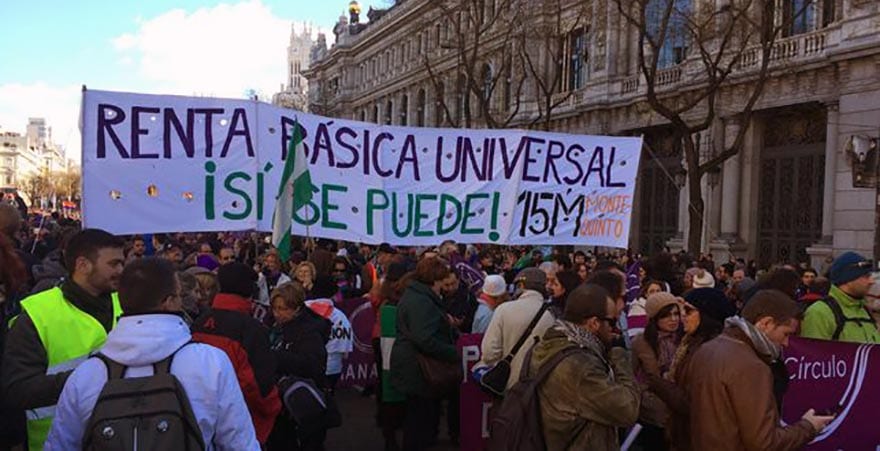 The Podemos working group on basic income has started a procedure to bring basic income back to the party’s forefront proposals for the next general election. They need 37,000 signatures to trigger a binding internal referendum on the issue.

Last November, the Spanish political party Podemos released “An economic project for the people” which was a draft economic program for the next general election. Written by professors and party leaders Vicenç Navarro and Juan Torres, the document excluded basic income as an immediate proposal for implementation, viewing it instead as a long-term goal for the party. They propsed instead the introduction of a means-tested guaranteed minimum income more comprehensive than the current Spanish welfare system.

Although the official program for the next general election in December 2015 has not yet been adopted by the party, the publication nurtured doubts that basic income would not be a main proposal of Podemos in the future.

Disappointed by such development, Podemos Renta Basica, the party’s ‘circle’ working on basic income, has started a campaign to bring the idea back into the party’s electoral platform, ahead of the general election.

Podemos members can now sign an internal petition to support the initiative. If the petition collects the support of 37,000 members within 3 months, an internal referendum will be conducted among the full membership of the party. This vote will be binding, and could only be revoked by another referendum, meaning that unconditional basic income would become a permanent part of the Podemos program. So far more than 2,000 members have supported the proposal.

“We at Podemos Renta Basica consider the current proposals inadequate as an instrument of wealth redistribution to prevent and eradicate poverty. Only basic income can end social precariousness and articulate a new social and economic relationship with freedom.” the statement reads.

Podemos Renta Basica has increased its efforts to promote the concept. Notably, they have published a handbook (pdf) which offers an overview of the arguments for basic income and a proposal for its implementation in Spain.

After gaining 5 seats at the European Parliament, Podemos is seen as potential winner in the upcoming election. The party currently stands in third position in opinion polls, with about 20%  intending to vote for their candidates.