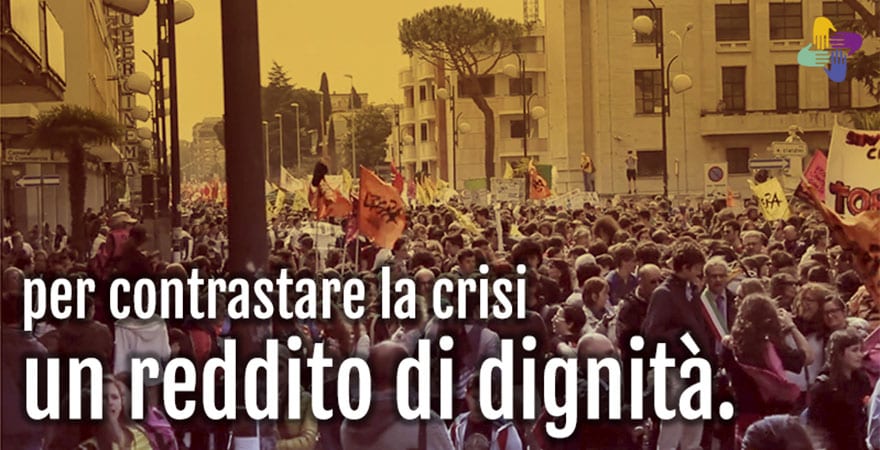 Several Italian civil society groups have rallied to a 100-day campaign which promotes the concept of a ‘dignity income’ as a way to counter mafia power.

There was a resolution at the European Parliament on 16 October 2010 which stressed the important “role of minimum income in combating poverty and promoting an inclusive society in Europe”, and recommended that all EU countries adopt a minimum income scheme. Italy is still one of the few EU countries (along with Hungary, Bulgaria and Greece) which has not yet done so.

In order to remedy this problem, a new alliance of civil society organisations started a campaign called “100 days for a dignity income” on March 13th. The campaign has a simple goal: get a minimum income passed into law within 100 days.

The leaders of the campaign argue: “It is not impossible, our proposal is not unrealistic: there are several bills pending at the Palazzo Madama (the Italian Senate building).”

The campaign is led by the 20-year-old anti-mafia organisation, Libera, later joined by several anti-poverty networks. In a press release, Libera stressed the relevance of minimum income as a key tool against the Mafia’s blackmailing of the poor’:

“The Minimum or Citizen’s Income, is also a key tool for fighting organised crime in a period of crisis and increasing poverty and social inequality. It removes oxygen from those who exploit the need to work and turn it into economic blackmail, which fuels criminal networks who then take advantage of poverty for their own businesses. A minimum income law would make people less vulnerable in the face of those who want to exploit their needs and vulnerabilities.”

A first step towards basic income in Italy

Behind the concept of “dignity income” the campaign is the idea of “a minimum income support that provides a safety net for those who cannot work or go to a job that can guarantee a decent income or do not have access to social security systems,” says the manifesto. It is therefore not exactly a basic income as we understand it.

In the context of Italian politics however, a means-tested and conditional minimum income is often considered as a necessary first step towards a universal basic income.

The Basic Income Network Italia (BIN-Italy) supports the campaign because it goes in the right direction. BIN-Italia will foster public initiatives, debates, seminars and other meetings to raise awareness both amongst public opinion and decision makers of the necessity of a guaranteed basic income nn a country where 10 million people live in relative poverty (16.6% of the total population) and more than 6 million, (9.9% of the population), in absolute poverty.

After 30 days of campaigning, 65,000 citizens have already supported the new campaign by signing a petition to the national parliament. The organisers aim is for 100,000 signatures. Two years ago, a similar citizens’ initiative received more than the necessary 50,000 signatures to be discussed at parliament, but was never given a serious hearing.

This time, as with the last campaign, many politicians and political parties have expressed their support for the campaign, including political parties Sinistra Ecologia Libertà (Left Ecology Liberty), Movimento 5 stelle (5 Stars Movement) and Rifondazione Comunista (Refounded Communist Party) and one of the main metalworkers labour unions, FIOM.

Moreover, the mayors of the cities of Udine, Cerveteri, Monterotondo have not only signed the petition but also presented a petition at their City Councils for their cities to officially promote the campaign.

However, the Minister of Labour Giuliano Poletti remains unconvinced. Just a few days after the start of the campaign he publicly opposed it, claiming that a minimum income would “cost many billions, and be unsustainable for the current national budget”.

With contribution from Emanuele Murra