Alaska’s Budget Deficit is Political Threat to its Basic Income 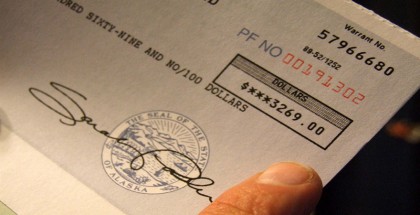 Alaska’s Permanent Fund Dividend is the closest thing to a Basic Income that exists in the world today. It gives every U.S. Citizen who fills out a form verifying Alaska residency a check for a share of the revenue from the Alaska Permanent Fund each year. The fund and dividend—on their own—are on solid financial footing. Left alone, they can continue as long as there is a State of Alaska. But the same can’t be said for the rest of Alaska’s budget. Most of it is financed by revenue from the state’s oil exports. Oil reserves are finite, and therefore, the revenue they provide temporary; and oil exports have been gradually dropping for years. The world oil market is volatile, and prices are down right now leaving the state with a substantial budget deficit, in the order of $3.9-4.0 billion this year and yet.

The state has no income or sales tax, making those the obvious sources of revenue for, but Alaskans are notoriously skeptical of personal taxes. The state has budget reserves (also funded out of oil revenue), but at current deficit rates, it could spend through those in a matter of three to five years. If oil prices don’t bounce back or if oil exports continue to decline, this strategy would merely put off the day of reckoning and put the state in a worse financial position when that day comes.

With all this issues, Alaska’s $54 billion Permanent Fund is a tempting target for legislators. The constitution protects the fund’s principal, but not it’s earnings. Almost all of the fund’s earnings have been dedicated to supporting the dividend since the dividend’s inception in 1982. The dividend has been protected by its enormous popularity, but with greater financial pressure on the state budget the political balance might change and the dividend—or its future growth—could be at risk.

To read some of these proposals, go to:

Scott Goldsmith. “Alaskans, we better wise up before we burn through our savings.” Alaska Dispatch News, April 9, 2015.

Follow
3 comments Alaska
The views expressed in this Op-Ed piece are solely those of the author and do not necessarily represent the view of Basic Income News or BIEN. BIEN and Basic Income News do not endorse any particular policy, but Basic Income News welcomes discussion from all points of view in its Op-Ed section.