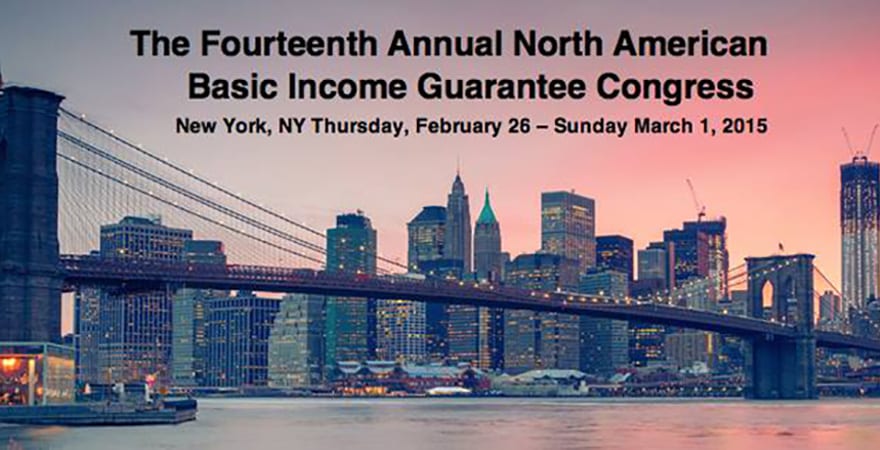 Most events will be held in conjunction with the Annual Meeting of the Eastern Economic Association (EEA) at the New York Sheraton Hotel and Towers‎. The Congress will also involve free events including a public discussion Thursday, February 26 and a political movement meeting at the Brooklyn Commons on Sunday March 1.

Featured speakers at the conference include Marshall Brain, futurist and author of How Stuff Works and Manna; Peter Barnes, environmentalist and author of Who Owns the Sky?, With Liberty and Dividends For All, and Capitalism 3.0; Ann Withorn, welfare rights activist and Professor Emeritus, University of Massachusetts Boston, author of Serving the People: Social Services and Social Change and co-editor of For Crying out Loud: Women and Poverty in the U.S.; Jim Mulvale, Dean of the Faculty of Social Work at the University of Manitoba and Vice-Chairperson of the Basic Income Canadian Network (BICN/RCRG), Mary Bricker Jenkins, Professor of Social Work, Temple University, and US Welfare Rights Union leaders, and forty other speakers.

6:30pm to 9pm: Public Discussion: “New Possibilities for the Basic Income Movement”
Location to be announced

8am to 7pm: Sessions at the Sheraton Hotel, 811 7th Avenue, New York, NY
Evening: social event to be announced

8am to 6:30pm: Sessions at the Sheraton Hotel, 811 7th Avenue, New York, NY
Evening: social event to be announced

6:00pm: Meeting: “Are we ready to start an activists movement for BIG in the United States?” We’ll chip in for pizza and drinks, but we’ll share the food and drink unconditionally with everyone who comes—without means test or any requirement to make a reciprocal contribution. We will discuss this question without any more specific agenda. Karl Widerquist will moderate the discussion, but will not lead the discussion or any effort that might come out of it. Location: Brooklyn Commons, 388 Atlantic Ave. Brooklyn, NY. This event is free and open to everyone.