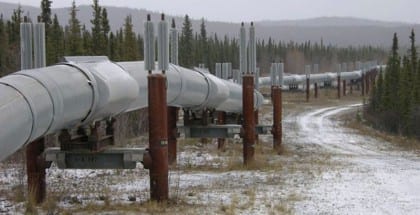 The recent drop in oil prices has had a devastating effect on the Alaska state government’s budget, most of which is derived directly or indirectly from current oil revenues. Alaska’s Permanent Fund Dividend (or PFD—Alaska’s small basic income) is not financed by current oil revenue and so is technically unaffected by fluctuating oil prices, but budgetary pressure from declining oil revenues could cause political pressure to divert revenue from the PFD into the main budget.

The PFD is financed by the Alaska Permanent Fund (APF), a sovereign wealth fund set up in 1976 to make some of Alaska’s oil windfall permanent. The APF is protected by the state’s constitution: the state can spend only the returns to the fund, not the principle. But the PFD does not have similar projection. It was created by an act of the state legislature in 1982, and even with 33 years of precedent, it is vulnerable to legislative decision. The PFD is so popular that it has been called “the Third Rail of Alaskan Politics,” meaning that any legislator who touches it dies. But budgetary pressure could change that political condition.

The recent decline in oil prices on top of a large tax cut the state government gave to the oil companies a few years ago has led to a very large budget deficit—currently projected at about $3.5 billion. Legislators are discussing how to fill the deficit. Some legislators have promised not to divert money slated for the PFD, but some recent editorials have called to divert money from the PDF to the general budget.

May different solutions are being discussed. One legislator has introduced a bill to amend the state’s constitution to permanently protect the PFD. A recent editorial calls for reversing the tax cut for the oil companies. One plan being proposed is to divert all new oil revenues to the APF, then use half of the returns from the APF for the PFD and the other for general revenue. Another plan calls for reintroducing the state’s income tax; the state has been without an income tax for as long as it has had the PFD. The absence of an income tax has been nearly as popular as the PFD. It remains to be seen whether support for the PFD will remain strong in the face of the prospect of reviving the income tax.

John Havelock, “Alaskans should be willing to pay their share with an income tax.” Alaska Dispatch News, January 26, 2015

Follow
Leave a comment Alaska
The views expressed in this Op-Ed piece are solely those of the author and do not necessarily represent the view of Basic Income News or BIEN. BIEN and Basic Income News do not endorse any particular policy, but Basic Income News welcomes discussion from all points of view in its Op-Ed section.