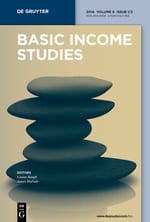 The paper shed light on a forgotten struggle of working class women in claimants unions that articulated a feminist rationale for an unconditional basic income and succeeded to pass the resolution which asked the whole British Women’s Liberation movement to endorse the demand, at the National Women’s Liberation conferences. The paper is based on an oral historical research conducted over 13 years.

The author said that he thanks to interviewees who gave him enormous support both practically and emotionally, and this prize is, he believes, awarded collectively to their admirable struggle, not individually to the nominal author.

The shorter version of the paper is published in the latest volume of Basic Income Studies (2014; 9(1-2); pp.1-24) and available for download here.

For the detail of the prize, see Basic Income Studies’s website.