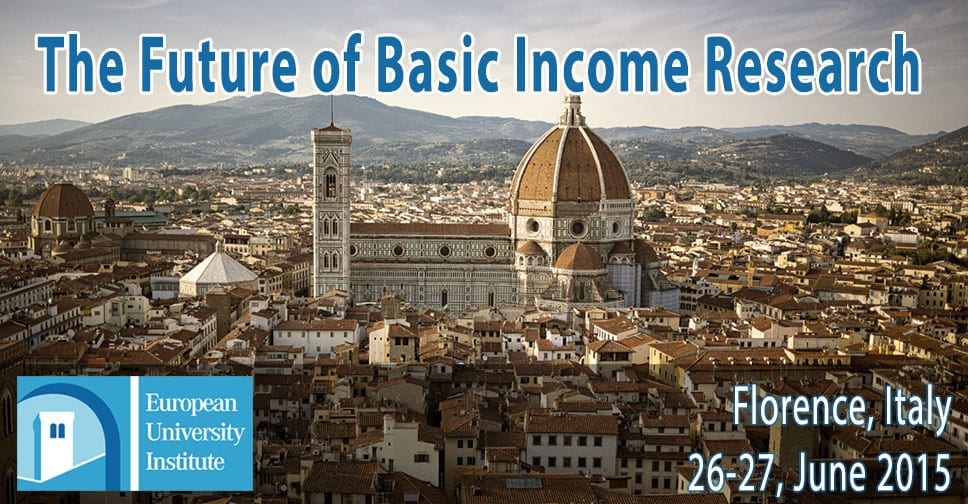 The Max Weber Programme at the European University Institute in Florence, Italy has released the following call for abstracts for the following conference: on “The Future of Basic Income Research:”

The Max Weber Programme at the European University Institute is proud to launch the following call for abstracts for a conference on the topic of universal basic income.

The past three decades have seen the elaboration of a vast body of literature on universal basic income – a policy proposal Philippe Van Parijs referred to as a “disarmingly simple idea”. It consists of a monthly cash allowance given to all citizens, regardless of personal desert and without means-test. Basic income studies are an example of successful interdisciplinary research, involving philosophers, economists and sociologists, among many others. Basic income (BI) proponents have identified, evaluated and deconstructed many potential and actual objections against this radical proposal. Yet for young scholars interested in, but new to, basic income, the field might seem crowded and overwhelming. This conference aims to look into the future of basic income research: Which questions have been left unanswered, which questions should be posed? What should be on the research agenda for the next 10 years?

We invite submissions of abstracts of no more than one page for the conference that will take place on Friday June 26th. Please also provide a short biographical sketch. The deadline for submission is February 15th 2015.

We are also pleased to announce that the conference will also feature a book workshop on Saturday June 27th. Philippe Van Parijs and Yannick Vanderborght will discuss with select participants their new book manuscript on basic income. All participants are welcome to join the workshop. Those interested in acting as discussants are invited to email us.

Please confirm your attendance to both the conference and the workshop by emailing Juliana Bidadanure (Juliana.Bidadanure@eui.eu) or Robert Lepenies (Robert.Lepenies@eui.eu).