This book, released in 2011, is now available for free as a computer-generated audio book in MP3 format. (It is also available for download as PDF, see story from BI News, May 19, 2013). The hard copy is still available for €29.90. Philippe Van Parijs is one of the leading philosophers writing about basic income today. Many of the chapters in this book respond to his ideas about basic income. 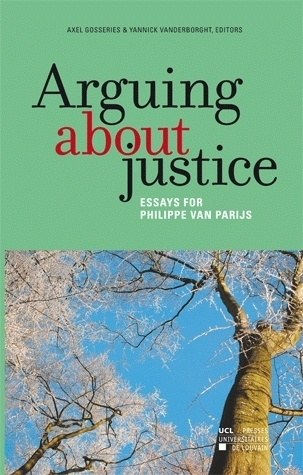 The audio version of the book is not read by a human being. It is created by read-out-loud software in a computer-generated voice. But it provides an accessible version of the text ready for downloading from the internet and uploading onto an iPod or any other portable audio player.

According to Noble Laureate, Amartya Sen, “A book of quick and sharp thoughts on a grand theme is a novel way of paying tribute to a leading philosopher. But it has worked beautifully here, both as a stimulating book of ideas on justice, and as a fitting recognition of the intellectual contributions of Philippe Van Parijs, who is one of the most original and most creative thinkers of our time. ”

The PDF version is available at: https://www.academia.edu/2396206/Arguing_about_Justice_Essays_for_Philippe_Van_Parijs_PUL_2011_free_PDF_