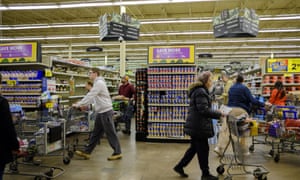 The Guardian newspaper asked me to write an opinion piece about the Emergency Universal Basic Income (UBI). They changed my headline but otherwise, printed it as I wrote it.

America is in crisis. We need universal basic income now. By Karl Widerquist, the Guardian, 20 Mar 2020

I’m reprinting it here in full:

A few members of Congress recently have suggested that the United States government institute an emergency Universal Basic Income (UBI) in response to the twin crises of coronavirus and the stock market collapse, which many economists believe could signal the start of a significant recession. UBI provides an unconditional sum of money from the government for permanent residents whether or not they work. Proposals for an emergency UBI vary. One common suggestion from lawmakers is $1,000 a month for adults and $500 a month for children for four months or more if the coronavirus persists. This amount would be an enormous help in this crisis.

I’ve studied UBI for more than 20 years, and I find that opposition to it usually comes down to two main arguments: that everyone should work or that we simply can’t afford it. Whether these are valid or invalid arguments against UBI in normal times has been debated for decades, but they simply don’t apply to the emergency UBI during the current situation.

Right now, we don’t need everyone to work. In fact, we need a lot of people to stop working. We don’t want food service and healthcare workers who might be sick to go into work and infect people because they can’t afford to stay home. In an economy where millions of people live paycheck-to-paycheck, an emergency UBI would give non-essential employees the opportunity to stay home during the coronavirus outbreak, slowing the spread of the disease. The more people we have who can afford to stay home the better off we’ll be, at least for the duration of the outbreak.

Most economists will agree that the economy needs injections of cash right now. When economies slide into recession, there is a “multiplier effect” as people lose their jobs and businesses contract, they spend less. Other people then lose their jobs or contract their businesses, and this multiplier effect continues. The economy shrinks, income declines, and money literally disappears from circulation.

Governments can help stop this process by creating money and injecting it into circulation. After the 2008-2009 economic meltdown, the United States government and governments around the world created trillions of dollars worth of currency out of thin air and injected it into the economy, usually by buying back their own debt, in an effort to stimulate demand and reverse the multiplier effect. Buying back government debt isn’t necessarily the best way to stimulate the economy, however. The money goes mostly to people who are already rich, and they have very little incentive to invest that money when everyone else is losing income.

An emergency UBI is just about the best economic stimulator that exists in modern times because it gets money in the hands of everyone. No one’s income would go to zero due to stock market-related layoffs or corona-related precautions. That income helps people maintain some of their spending, which helps prevent others from losing their jobs through the multiplier effect.

Congress should act now. An emergency UBI, providing $1,000 per adult and $500 per child, per month, for four months or as long as the outbreak lasts, can help everyone get through this critical time. The sooner our government acts, the sooner we start to recover. We don’t know how bad coronavirus will get. We shouldn’t have to worry about how we will be able to buy food and pay rent as well.

We need people to spend money.

And we don’t need them to work for it.