Review of the RSA report on Universal Basic Income 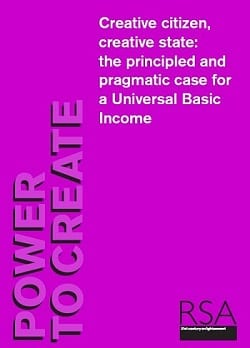 This report from the RSA is a most welcome addition to the recent flurry of publications and media interest in Citizen’s Income. It outlines a context – technological change – resulting in

underemployment, unemployment or the need to transition careers with some frequency for many. A Basic Income could provide a foundation to smooth working-life transition; (p. 5)

and an ageing population, requiring more people to spend time on caring for others.

The report notes the growing Citizen’s Income movement; studies a variety of other reform proposals (and particularly a Participation Income and an enhanced contributory system); and argues that polling data that shows that the British public regards ‘making work pay’ as far more important than tackling poverty and inequality provides a powerful argument for Citizen’s Income:

It is Basic Income and Basic Income alone that sends out absolutely clear yet non-coercive signals about the incentive to work. … Basic Income is a foundation for contribution. It incentivizes work but supports other forms of contribution too. In this regard, it is the system of income support that best rewards contribution – albeit contribution defined beyond narrow cash terms. (p. 14-15)

The report describes the UK’s current benefits system, notes that the sanctions regime will increasingly attack the self-employed and the employed once Universal Credit is rolled out, shows how Citizen’s Income would offer the ‘power to create’, and then sets four tests for the idea to pass:

The particular scheme that the RSA evaluates in relation to the second and third criteria is based on the scheme published by the Citizen’s Income Trust (CIT) in 2012 but with a few minor variations – you can download the CIT proposal here.

A non-binding contract to encourage contributions to society will run alongside receipt of Citizen’s Income. The fact that it is non-binding, and the recipient’s failure to adhere to an agreed contract would not compromise their receipt of a Citizen’s Income, retains the scheme’s reciprocity – important for its ability to pass the first test – and retains it as one characterized by an initial act of generosity on the part of the state, rather than as one that expects a claimant to prove a contribution before the state reciprocates. There is, though, a danger with such a contract. It would be easy for a future government to make receipt of a Citizen’s Income dependent on adherence to a contract’s conditions, thus turning the Citizen’s Income into a Participation Income, so that it would no longer be a Citizen’s Income and would be loaded with administrative complexity and bureaucratic intrusion in people’s lives – precisely what is not required.

A compromise that has nothing to commend it, though, relates to lone parents:

One group that could lose out in the transition to Basic Income in the RSA model are low income, lone parents with children over the age of five. … there may be scope for a transitionary measure whereby lone parents could continue to claim a Child Benefit top-up … introducing an element of household calculation. (p.31)

The RSA report is a long, detailed, well researched, and most useful document, and no short review can do it justice. The minor caveats that I have listed above are precisely that: minor caveats, and areas for continuing research and debate. The RSA is to be highly congratulated on the research project that has led to the report, and on the report itself. There could be no better place to start the next phase of the Citizen’s Income debate than this report.

Leave a comment Citizens Income Trust, RSA, United Kingdom
The views expressed in this Op-Ed piece are solely those of the author and do not necessarily represent the view of Basic Income News or BIEN. BIEN and Basic Income News do not endorse any particular policy, but Basic Income News welcomes discussion from all points of view in its Op-Ed section.