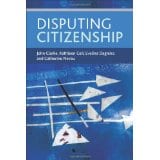 The authors of this book come from the UK, the USA, Brazil, and France, and in all of these countries they find evidence for their major contention: that there is so much conflict over the keyword ‘citizenship’ because citizenship is a focus for conflict within society – which of course makes conflict over the idea different in each of the four countries. Citizenship therefore has no fixed or ‘proper’ meaning, but instead has a diverse history of complex meanings – click here to learn more about citizenship and immigration laws.

In their first chapter the authors ‘recentre’ citzenship to the margins of society where people do not experience the full benefits of their or others’ understandings of citizenship.

Citizenship is both exclusionary and aspirational, the object of desire and the product of dispute, as well as a dispute in itself. (p.49)

In the second chapter they ‘decentre’ citizenship by showing how its connection to a variety of social actors decentres it from state governments and bureaucracies. Citizenship therefore becomes less of a legal status and more of a discourse about the relative strengths of different political and social actors. The authors might usefully have mentioned the Scottish independence referendum as a location for conflict over citizenship and – whichever side had won – as a decentring of citizenship from Westminster.

The third chapter shows how diverse the many locations of citizenship discourse are, and how this means that the concept is always under construction and never in any sense fully defined. The UK in particular represents a patchwork of levels at which citizenship is exercised and contested: the UK, its four separate nations, local government, and such institutions as schools: and here we see most clearly the authors’ understanding of citizenship as a social process rather than as a legal status (which for most people living in England it is only in an ambiguous form anyway, because we are the subjects of a monarch and without a legally defined citizenship – except for immigrants who have passed the citizenship test and attended a town hall ceremony and are therefore in some ways more ‘citizens’ than the rest of us).

Given the authors’ agenda it is no surprise that the book is ‘undisciplined’, by which the authors mean that it does not fit neatly into such disciplines as political economy, but instead wanders across disciplinary boundaries in order to understand the conflicts around citizenship and the context-specific nature of understandings of it. Where the authors do find coherent theories of citizenship (for instance, Marshall’s), they show that such theories are as context-specific as the conflicts around citizenship.

[This review was first published in the Citizen’s Income Newsletter, 2015, issue 3.]