Size of a Citizens’ Dividend from Carbon Fees, Implications for Growth 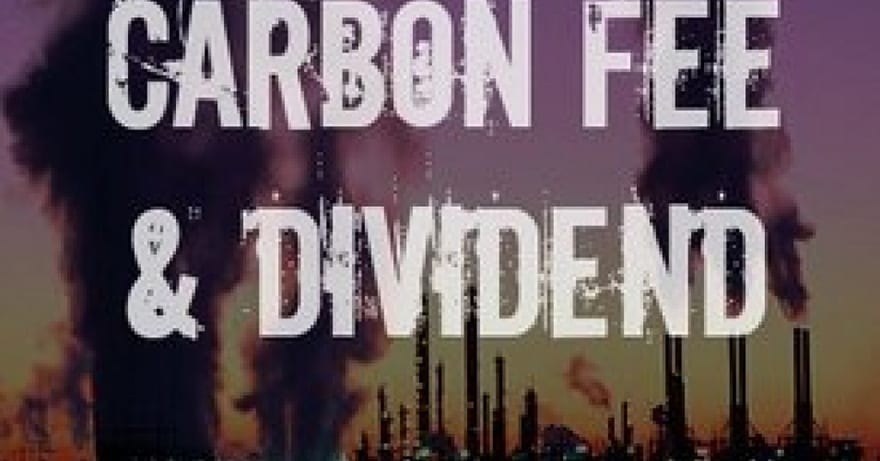 An emerging proposal for a carbon fee and dividend would yield a substantial dividend payment, eventually exceeding the amount of Alaska’s Permanent Fund Dividend, to American households. Citizens’ Climate Lobby (CCL) is proposing a revenue-neutral carbon fee. This would be collected from the companies operating hydrocarbon mines and wellheads, wherever carbon is first introduced into the economy, from which 100% of the revenue would be returned to the citizens as dividends. CCL’s proposal starts with a fee of $15 per metric ton of carbon, then would raise the fee by at least $10 per year (higher if faster carbon reduction is warranted) until environmental target reductions are met.

Using a carbon tax and dividend calculator at the Carbon Tax Center, I calculated what the individual and household annual dividends would be for selected years from 2016 (the hypothetical initial year) to 2039 (the last year available in the calculator). Households are assumed to contain an average of 2.6 people.

Although not a full basic income by any means, a carbon dividend promises to be a significant addition to individual and household incomes, surpassing the average amount of the Permanent Fund Dividend in less than a decade. By 2039, it is estimated the proposed carbon fee would reduce CO2 emissions 48% from 2005 levels, substantially more than the reductions projected for the EPA’s Clean Power Plan.

That sounds impressive, but is it enough? Citing experts at the Tyndall Center for Climate Change Research in her compelling vision for remaking the economy to combat global warming, This Changes Everything, Naomi Klein claims that “our only hope” of keeping global warming below 2°C, “is for wealthy countries to cut their emissions by somewhere between 8-10 percent a year….This level of emissions reduction has happened only in the context of economic collapse or deep depressions” (21).

Kevin Anderson of the Tyndall Center maintains that there needs to be an 80% cut in emissions in the Annex 1 (wealthier) countries by 2030, if we are to meet the 2°C target, and also allow developing countries’ emissions to peak somewhat later. This, he argues further, requires a “de-growth strategy,” a planned period of reduced economic activity. He does not think that carbon pricing will suffice to reduce carbon emissions at the rate required, for the following reasons:

Suppose that we need to reduce our emissions 80% by 2039. How much of a carbon fee would be needed, and how much would it yield in dividends? Starting at $20/ton, and beginning in 2016, with increments of $40/ton/year, these are the results from the Carbon Tax calculator:

At first glance, this suggests that the carbon fee would bring a halt to growth, as it would equal or exceed the normal growth rate of the economy (around 2%). However, accounting for the fact that the revenue is being returned as dividends, the effect may be to steer growth in another direction, away from carbon energy, which will quickly become unaffordable.

Of course, all this depends on the soundness of the projections for emissions reductions at various levels of carbon fee. We have no experience with carbon fees accelerating so rapidly. One case study suggests that carbon taxes may not be as effective as one would hope: the Norwegian carbon tax, one of the highest in Europe, resulted in relatively modest reductions of carbon emissions compared to business as usual, and over the 1990s, carbon emissions rose 15%. One problem was exempting industries on account of competitiveness, and another more telling issue was the inelasticity of demand for some forms of carbon use, such as transportation. The record of British Columbia’s revenue-neutral carbon tax is more encouraging, but since it topped out at $30 per ton in 2012, it is hard to extrapolate from that case to the more ambitious targets discussed here.

In the model discussed above, there are no exemptions. But with the more ambitious fee, it may not be possible for demand to shift rapidly enough from carbon fuel to renewables, and the effect of the fee could be mainly to depress demand, and with it economic activity, as has happened in the past when energy prices rise. Then it would appear that rapid carbon emissions reductions would not be compatible with economic growth.

For basic income researchers, I will conclude by noting the tension between analyses such as this, which envision basic income as part of equitable environmental policy and at least a transition period of de-growth, and those analyses that see basic income as an economic stimulus for growth.

Michael W. Howard is Professor of Philosophy at the University of Maine, USA. He is the coordinator of the US Basic Income Guarantee Network, co-editor of Basic Income Studies, and co-editor, with Karl Widerquist, of two books on Alaska's Permanent Fund Dividend.