Report from the 15th Congress of the Basic Income Earth Network 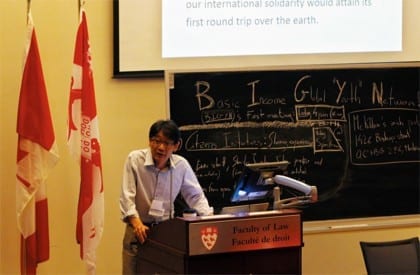 The 15th International Congress of the Basic Income Earth Network was held in Montreal at McGill University from June 27 to June 29, 2014, and a pre-conference North American day was held on June 26. The event was sold out with well over 200 people attending.

Two of the central topics at the conference were the recent basic income pilot projects the recent petition drives for basic income. Renana Jhabvala, of Self-Employed Women’s Association and Guy Standing, of School of Oriental and African Studies discussed the recent pilot project in India. Among other results, basic income was found to increase health and employment.

Enno Schmidt, Co-founder of the Initiative Basic Income in Switzerland and president of the Cultural Impulse Switzerland Foundation, and Stanislas Jourdan, Co-founder of the French Movement for Basic Income and Coordinator for Unconditional Basic Income Europe, talked with Barbara Jacobson, of Basic Income UK, and Philippe Van Parijs, of BIEN, about the citizens initiatives of basic income in Switzerland and the European Union (EU). Between the two initiatives, activists raises more than 400,000 signatures, enough to trigger a vote in Switzerland to take place in 2015 or 2016. Although the EU movement did not receive enough signatures to trigger a vote, it created headlines across the continent, sparked a pan-European movement for BIG (UBIEurope), and organized national movements in all of the EU’s member states.

Joe Soss, of University of Minnesota, gave the NABIG (North American Basic Income Guarantee) lecture, which was surprisingly optimistic despite its depressing title, “Disciplining the Poor, Downsizing Democracy?” He discussed how many recent social policies from welfare “reform” to the 500% increase in the incarceration rate are part of an international trend toward treating poverty as willful misbehavior curable only by discipline. The optimism came from his belief that people are coming to recognize what’s been happening, and they’re fighting back through various movements.

The conference included a good mix of academics and activists. The Congress generated press around Canada and to some extent around the world. Some of the attendees started an international youth activist organization for the basic income, called Basic Income Generation. The Basic Income Canada Network furthered its push for a $20,000 basic income for all Canadians. The theme of technological unemployment recurred through many of the sessions—much more than it has in any past BIEN Congress. Thomas Piketty’s Capital in the Twentieth Century, was discussed by many of the academics at the Congress. And discussion of the Great Recession was frequent.

A new Executive Committee (EC) was elected by the GA, including Louise Haagh and Karl Widerquist as Co-Chairs, Anja Askeland as Secretary, Borja Barragué as Treasurer, and Andrea Fumagalli, Toru Yamamori, Pablo Yanes Rizo, and Jason Murphy as EC members for News and Outreach.

Several issues were tabled (delayed) due to lack of time. These included some proposed amendments to BIEN’s statutes and a proposal to change BIEN’s definition of unconditional basic income to include a clause that it must be high enough to allow individuals to live in dignity.

The GA ended with a bit of drama. Before we could give up the room to the cleaning crew, which had been waiting much longer than they expected, the GA had to decide the location of the next Congress between three impressive proposals from affiliates in Finland, the Netherlands, and South Korea. As time was running out, the representatives of Netherlands and Finland both dropped their bid in favor of Seoul, Korea, and the motion was quickly passed unanimously.

I think I speak for all of BIEN’s leadership when I write that we are looking forward to working with Korea on the 2016 Congress and to working with UBIE and all of BIEN’s European affiliates to help build on the political moment for basic income has devleoped on that continent.
-Karl Widerquist, Cru Coffee House, Beaufort, North Carolina, June 13, 2014

Some of the press coverage of the BIEN Congress:

Beryl Wajsman, “The fierce urgency for a guaranteed national income”, The Metropolitain, 30 June 2014.

Dan Delmar, “The Exchange Podcast with Dan Delmar,” CJAD 800AM Radio, 2 July 2014. [Discussion of BIG begins about 18 minutes into the broadcast.]

Follow
Leave a comment Europe
The views expressed in this Op-Ed piece are solely those of the author and do not necessarily represent the view of Basic Income News or BIEN. BIEN and Basic Income News do not endorse any particular policy, but Basic Income News welcomes discussion from all points of view in its Op-Ed section.