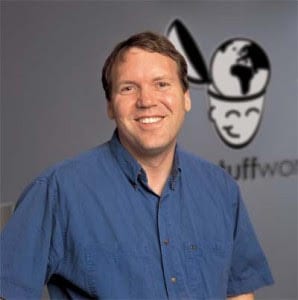 Marshall Brain is a science writer (both fiction and non-), futurist, founder of the website How Stuff Works, and a long-time advocate of basic income. His book, Manna: Two Visions of Humanity’s Future, makes a case for basic income—and for a post-work society altogether—through the vehicle of science fiction.

The novel is essentially a thought experiment, working through two possible ways in which society might react when technology becomes so sophisticated that machines replace virtually all human labor. In the dystopian part of the story, America essentially warehouses its excess human labor in humane, but highly restricted and regimented residential community. In the later part of the story, the main character makes his way to Australia where the resources that make the machines run are jointly owned, and people do not have to work if they do not want to.

The story moves quickly beyond basic income to a society that has no more need of paid labor. In Manna’s vision, there is such little need for human effort that people are free to pursue whatever projects they wish, some of which is things we would call “work” but not “paid labor.”

No doubt not all readers will find all aspects of Brain’s utopian vision to be truly utopian. His characters willingly concede a great deal of power over their lives and their own bodies to a centralized, impersonal computer system. They do it for security, but the fear that it will be misused will hit some readers even if it is ignored in the book.

The most important part of the book for BIG supporters is the warning in the dystopian portion of the book. America deals with less need for labor by squeezing wages and then eventually warehousing workers. Brain’s nonfiction work has argued that the rate of increase in computer and robotics technology makes the level of technology discussed in this book a realistic possibility—perhaps sooner than most of us think.

In any case, robotics technology is already here. It’s replacing human effort on a daily basis. It’s affecting our labor market, and those effects will increase every year from now on. Whether or not it will eventually replace all labor, we have to think about how to react to the labor it is now replacing on a daily basis. If we no longer need everyone to work, then BIG has to be part of the solution.
-Karl Widerquist, Cru Coffee House, Beaufort, North Carolina, June 2014